This meme was started by Books by Proxy, whose fabulous idea was to compare UK and US book covers and decide which is we prefer. This meme is currently being nurtured by Lynn’s Book Blog and this week we are featuring on cover that is UPSIDE DOWN, so I’ve selected The Opposite House by Helen Oyeyemi. 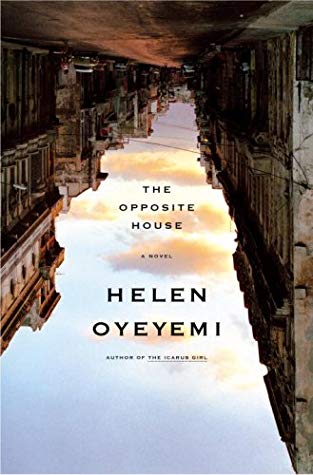 This edition was produced by Nan A. Talese in June 2007 and is my favourite and the reason why I selected this book. It is striking and clever, as well as being beautiful with plenty of intriguing detail. Though if I were to be picky, I would add that in thumbnail the title and author font are all but invisible.

Published in May 2008 by Bloomsbury, this cover has grown on me. Initially I was rather underwhelmed, but that young woman’s gaze is mesmerizing. I like the bold title font which works well in thumbnail and the warm colour is enticing and adds to the charm of this accomplished effort. My chief grizzle is that there is far too much chatter scattered across this cover which compromises the artwork.

This edition, published by Bloomsbury in July 2007, is quite different from the previous offering. While I like the idea of the title looking like lighting, it doesn’t work well in thumbnail and that strong teal background somehow swallows the white. I think the pink flowers look striking, but for the life of me – I have no idea what is going on at the bottom of the cover. Is it an arm? An arched back? Please give me your suggestions – the fact I cannot make it out is indicative that whatever effect Bloomsbury were going for, it hasn’t worked all that well.

Produced by Bloomsbury Berlin in September 2007, this monochrome offering offers yet another contrast to all the previous designs. Rarely have I come across a book with such a wide disparity in design approach… The blurred nightie floating out of the window gives this a strong horror vibe, though I don’t get that impression from any of the other covers. I think the title font is far too thin and tentative – it gets swamped by the backdrop and is impossible to read in thumbnail. I am conscious that I have given you quite a disparate selection – so which is your favourite?