Himself picked this one up – and recommended that I read it. After trudging through a couple of hefty fantasy reads, I was yearning for a sci fi space opera adventure and reached for this one…

Twenty-five years ago the Vardeshi came to Earth. Then they vanished without a trace. Graduate student Avery Alcott always knew they would return. When they do, she’s the only one who can speak their language. She’s quickly recruited to join the crew of an 11-man starship on a one-year mission into the depths of space.

What an impressive debut! I loved the character of Avery – bookish, quiet and introverted, which doesn’t 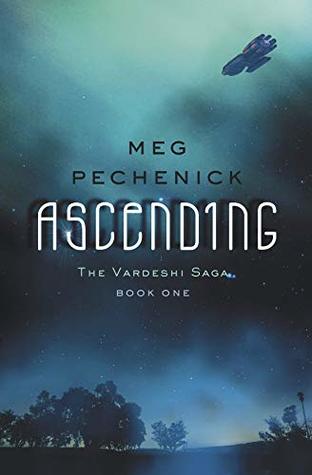 stop her being driven and single-minded with hidden resources. Which she certainly needs… She is a linguistic student selected by a brilliant college professor to learn the Vardeshi language just in case they return. And then they do – and she is the only person of an eligible age who can speak their language.

The preparation for a mission where she will be travelling on a Vardeshi ship as a member of their crew as part of the cultural exchange is so very well depicted. I found this book hard to put down as Avery finds herself tackling hand to hand combat, learning how to send secret messages and cooking her own meals on portable equipment as no one knew whether alien foodstuffs would be poisonous to humans, or vice versa. I also loved her struggles to acclimatise – finding the lighting, slight gravity differences, the fact that everything around her isn’t designed for a human body – an issue that she has to cope with.

When things begin to escalate, I’ll admit my heart sank for a while, as I had a horrible feeling this was going to slide into a Hollywood scenario where the whole situation would become overblown and unrealistic, after it had started so strongly. Fortunately, I think Pechenick manages to avoid that one – the nightmarish situation Avery finds herself in is, after all, believable – as is the fallout.

I tore through this one, unable to put it down until I reached the end – when I was adrift with longing for more… I’m really looking forward to reading the next book in this series, Bright Shards which is coming out on 1st August – and we’ve pre-ordered it. Very highly recommended for fans of well written first contact adventures.
9/10