At some stage I downloaded this arc in return for an honest review – and then forgot to transfer it from my computer file onto my Kindle. Thank goodness I’ve now found it, because I thoroughly enjoyed this quirky offering by Lee Rossman, whose writing I have already enjoyed in her novella Anachronism – see my review here. 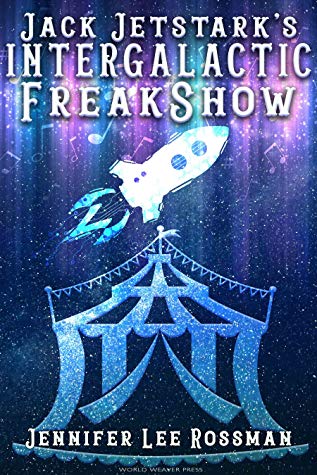 Jack Jetstark travels the universe to seek out the descendants of superpowered freaks created long ago by VesCorp scientists. The vibrations encoded in a particular song transform the members of Jack’s crew into a firebreather and an angel, a wildman and telepathic conjoined triplets, so they hide the truth of who they really are with the theatrics of a carnival. The song plays every night through the receptor Jack carries with them, but when one night it has a different ending and their temporary powers become permanent, Jack believes the change is a signal from the woman who sent him on this quest in the first place. He and his freaks must navigate a universe at war to protect the love of his life. But does the ruler of VesCorp really need protecting?

This entertaining read is something of a mash-up – one of those where the science fiction explanation works well, but nonetheless has more than a slight fantasy feel. I thoroughly enjoyed the first person protagonist, Jack Jetstark, who is a sympathetic character with a lethal skillset, but nonetheless comes across as emotionally vulnerable. I enjoyed his steadfast love for his childhood sweetheart that could come across as naïve, but because of the pledge they’d made – he completely trusted her. I also like the care he demonstrates for the disparate family of genetic ‘freaks’ he travels with.

However, their constant journeying from one backward planet to another, putting on their small show comes to an abrupt end when the music changes and with it, so does everything else. From that moment on, this adventure changes gear and the pace picks up whirling us into an action adventure that buckets forward full tilt.

At this stage it would have been easy for the characters to become thinner as they become caught up in events, but Lee Rossman keeps a firm grip on the pacing and her main players, to the extent that I found that my thoughts were often with the antagonist and her motivations. Is she necessarily wrong in her approach? Will Jetstark’s intervention make a bad situation worse? I think this is the mark of an accomplished writer to be able to raise those important questions while all the mayhem is kicking off.