Lauren Pailing is a teenager in the eighties, becomes a Londoner in the nineties. And each time she dies, new lives begin for the people who loved her – while Lauren enters a brand new life, too. But in each of Lauren’s lives, a man called Peter Stanning disappears. And, in each of her lives, Lauren sets out to find him. 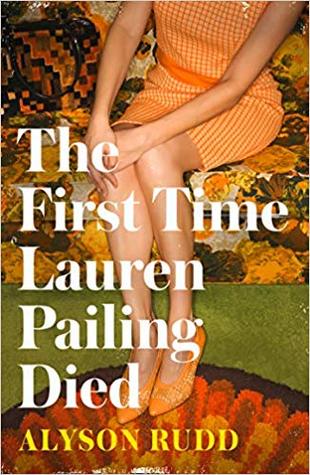 Strictly speaking this is historical, as the story starts back in the late 1960s, but like many others reading this one, the period covered also deals with my past. So the first question – does Rudd convincingly portray the recent past without holding up the narrative? Yes – she manages to slip in all sorts of little details that I had forgotten, yet were immediately recognised as I encountered them. I didn’t spot any anomalies, either – which, along with the accomplished writing and strong characterisation, helped to pull me completely into the story.

Lauren was well depicted as a small child, which isn’t as easy as Rudd makes it look, which is important, given her age when the first jolt out of time occurs. I was shaken at how Rudd tackles this – Lauren resurfaces into another timestrand where things are slightly different but largely the same. It would have been so easy to make this tediously slow-paced, or not quite convincing – showing slight differences is always harder to achieve than large, dramatic flourishes. But Rudd handles all this with ease, giving us a ringside seat into Lauren’s struggles to come to terms with what is happening to her, as well as allowing us to see how her death has affected her close relatives. As time goes by, we continue to track everyone most hurt by Lauren’s untimely death in a way that had me unable to put down the book.

Meanwhile, I also really liked how the two personalities are merged as Lauren copes in her new timestrand and learns not to mention what went before. However, the question of Peter Stanning and his sudden disappearance slowly emerges throughout all the timelines – and once Lauren realises this, she clings to the mystery of his absence, determined to try to hunt him down…

I’ll be honest – I’m not convinced that this particular plotline is wholly successful. While I liked the idea of Peter’s disappearance running through all the timelines, I felt this was built into a major mystery that was at odds with the final denouement. However, this could well have been deliberate, as the circumstances surrounding what happened to Peter and how that affected both his wife and sons, also added to the poignancy of his death.

While I had been expecting an entertaining read, I was unprepared for the elegance of the writing and plotting, or the excellent characterisation. Highly recommended for fans of timeslip adventures of the sliding doors variety. The ebook arc copy of The First Time Lauren Pailing Died was provided by the publisher through NetGalley in return for an honest opinion of the book.
9/10