This meme was started by Books by Proxy, whose fabulous idea was to compare UK and US book covers and decide which is we prefer. This meme is currently being nurtured by Lynn’s Book Blog and the subject this week SOMETHING SWEET has to feature on any of our covers, so I’ve selected Friends, Lovers, Chocolate – Book 2 of Isabel Dalhousie series by Alexander McCall Smith.

This edition was produced by Pantheon Books in September 2005. I like the design – the colourful shop front and pavement café looks delightfully enticing. But that horrid textbox slapped across the top blocks out far too much of the design – and given the café is at a slight angle and the textbox isn’t, the resulting clash of perspectives is jarring. If only it hadn’t been there – this one would definitely have been my favourite… *sigh*. 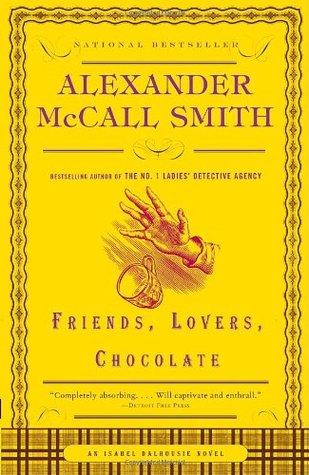 Published in August 2006 by Anchor Books, this cover is harking back to the past. The plain bright yellow really pops and I like the contrast with the chocolate brown for the borders, artwork and text, which gives it a classic feel. The touch of tartan and the dramatic hand dropping the cup of chocolate all give appropriate clues as to what the book is about. I really like this one.

This edition, published by Abacus in July 2006 has also gone for the vintage vibe. The bold, blocky artwork, strong primary colours and clear, capitalised text all refer back to the mid-20th century and the heyday of the whodunit. This is another strong candidate for this week’s favourite – I really like this one.

Produced by Little Brown in 2005, this is my favourite. I love the artwork, the chocolate drink, the rather natty glove draped over The Scotsman newspaper – all very nicely done. The lavender sprigs down the side also provide further eye appeal. 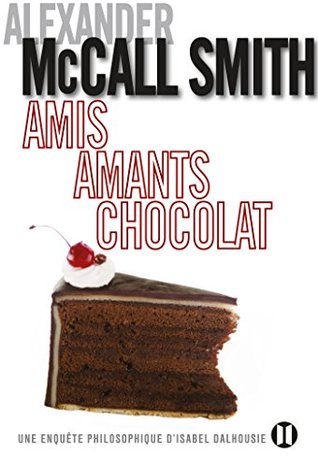 This French edition, published by Editions des Deux Terres in September 2013 is another strong contender. I love the image of the delicious chocolate cake with the single bite taken out of it – somehow more effective than a pristine slice. And while I’m not a fan of plain white backgrounds, this time it really works. I also think the lettering, both of the author and title is attractive and effective. Which is your favourite?