This is a series I’d downloaded for my granddaughter, which had thoroughly gripped her – and after starting the story, I could see why…

When the dead come back to haunt the living, Lockwood & Co. step in…. For more than fifty years, the country has been affected by a horrifying epidemic of ghosts. A number of Psychic Investigations Agencies have sprung up to destroy the dangerous apparitions. Lucy Carlyle, a talented young agent, arrives in London hoping for a notable career. Instead she finds herself joining the smallest most ramshackle agency in the city, run by the charismatic Anthony Lockwood. When one of their cases goes horribly wrong, Lockwood & Co. have one last chance of redemption. Unfortunately this involves spending the night in one of the most haunted houses in England, and trying to escape alive.

This is set in an alternate reality where fifty years ago, ghosts of people who had died in difficult circumstances are now feral. Mostly, they are annoying, manifesting as cold spots, bright lights and leaving uneasy feelings in their wake. But some of the stronger types are able to kill with a touch – and it’s only some ‘gifted’ children who can actually see or sense them clearly. This premise is a brilliant one, producing this dark, clever and often funny ghost story brilliantly narrated by Miranda Raison, who vividly portrays Lucy’s first person narration. 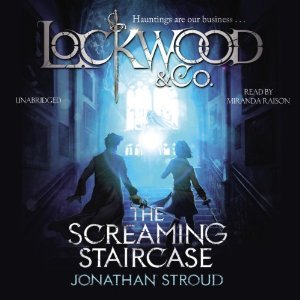 I had previously read and enjoyed Stroud’s wonderful Bartimaeus Trilogy – see my review of The Amulet of Samarkand – featuring an emotionally abused young warlock and a trapped djinni, whose withering and very funny commentary on human behaviour gives this book welcome shafts of humour. Lucy’s sharp-edged observations about her mysterious and brilliant young employer, Anthony Lockwood and his equally brilliant sidekick, George, often had me sniggering aloud as I listened to this one.

But that didn’t stop it being really creepy and utterly gripping when the trio were locked into a lethally haunted house – and very glad that I was listening to this one during the mornings when houseworking. There is the depth of characterisation I have grown to expect from Stroud, along with an exciting and well-paced adventure. The fact that I had already figured out who was doing what to whom before the denouement really didn’t matter – because the mystery was far more about how the heck they were going to survive the experience, anyway.

I’m thrilled to report that I already have the second book in this adventure ready and waiting to be heard – yippee! Far better for my blood pressure and mental health than listening to the catastrophic struggles in Parliament over Brexit…
9/10