I loved Athena’s Champion which I reviewed last year. I have a really soft spot for Greek god retellings and this classy debut left me wanting more – so I was thrilled when I had the opportunity to get hold of Oracle’s War…

When Prince Odysseus is sent on a quest to recover his family honour, he’s led to Delos where a mysterious new prophecy has captivated the gods. Caught in a tangled web of intrigue, he discovers that this prophecy is tied to his own destiny and the fate of his patron goddess, Athena. 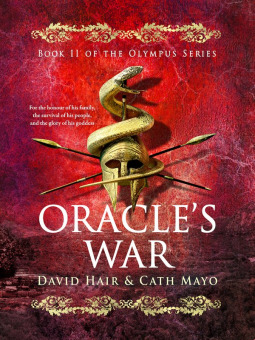 The action starts a few months after the events in Athena’s Champion at the occasion of Odysseus’s sister’s wedding – which doesn’t go according to plan and sends him off on a quest to avenge a wrong. I am really fond of this clever young man, whose quick wits save him from death more than once in this fast-moving adventure, where gods are amoral beings, intent on widening their pool of worshippers by any means at their disposal. Being one of their champions isn’t the privileged position you might think, given their nasty habit of using their half-human offspring as disposable agents to influence or alter events to their advantage. We meet up once again with a number of the characters first featured in Athena’s Champion – most notably Bria, another of Athena’s champions, who accompanies Odysseus on this quest. She is inhabiting another body and her lusty, cynical attitude, along with her careless attitude to the body she has invaded, sets Odysseus’s teeth on edge.

I liked learning more of the young man’s rocky relationship with the man who brought him up as his father, King Laertes of Ithaca, in this next slice of the adventure. And I also very much enjoyed the worldbuilding which Hair and Mayo weave in amongst all the double-dealing, life-changing prophecies, sorcery and thrilling fights. They effectively set out the political situation where the rise of the eastern cities, particularly Troy, is destabilising the scattering of states and islands further to the west. Not only is their culture under attack – their gods are in the process of being altered or swallowed up by their eastern counterparts – their financial future is also in jeopardy as traders increasingly drop off their goods at Troy, whose added tariffs are making life increasingly difficult.

We are currently around five years before the Trojan War and a sudden new prophesy has caused a major upset. The young woman who has delivered it is in great demand – and not all those seeking her are wellwishers, so Odysseus finds himself looking after her after she has been snatched. While he is impressed with the grey-eyed young woman, his heart has been stolen by a Trojan princess. This next slice of Odysseus and his adventures is every bit as exciting and vital as the first book. Recommended for fans of well-told Greek myth retellings. The ebook arc copy of Oracle’s War was provided by the publisher through NetGalley in return for an honest opinion of the book.
9/10