I thoroughly enjoyed the first book in this entertaining series, Battle Cruiser, and was keen to read the second book, hoping that it would be as good…

Captain William Sparhawk flies Earth’s single starship on a voyage of exploration. His crew of veteran 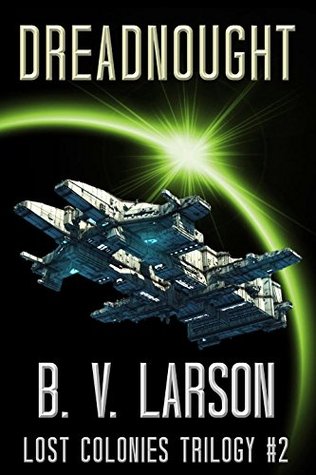 spacers begins the mission with high hopes and the best of intentions, but the universe has other plans. Instead of space merchants and potential allies, they discover Earth’s impending doom. Sparhawk must decide whether to hunt down enemy scouts to keep Earth’s new starship a secret, or to head home to warn Star Guard of the danger. Either way, he’s ignited an interstellar war.

I really enjoy William Sparhawk’s first person narration of his amazing adventures – his rather stiff-necked approach in the first book has significantly loosened up during this book. He continues his command of Defiant and after his escapades in the first book, I did wonder if Larson could sustain the level of risk, along with the skin-of-his-teeth vibe and the bounciness and regular shafts of humour that run through the book. And the answer is – he can.

On this crucial mission, William is taking the Defiant on a historic voyage of discovery to colonies that were cut off over one hundred and fifty years ago. In the face of a lethal threat discovered out among the stars, Earth now desperately needs powerful allies to help from being invaded. Can William’s mission find those allies?
The catch is that William’s mission is also being overseen by political forces on Earth as they are unwilling to allow him free rein – and to his utter dismay, the person they have nominated to act as ambassador, outranking him on the diplomatic side of his mission, is his very elderly aunt, the Lady Grantholm.

This twist in the story meant that throughout this demanding voyage, William continually finds himself not only having to deal with a range of dangerous columnists, none of whom have any fond feelings towards Earth, but also his aunt, who regularly appears on the bridge at the most inconvenient moments. This nicely ups the stakes as well as providing some humour.

And the other source of amusement are William’s occasional romantic attachments. I thought they were hilarious, especially when he becomes entangled with crew members. Larson provides a nicely nuanced hero, playing on the typical lantern-jawed version we are all familiar with, yet also giving our brave protagonist, one or two wrinkles that the likes of Captain Picard doesn’t possess. That said, I’ve become very fond of William Sparhawk and I’m delighted to note that this is part of a trilogy – so there is more Sparhawk goodness to enjoy with Star Carrier. Recommended for fans of character-led military science fiction.
9/10