This is another book I hauled last summer with my birthday money – and yes… I can’t lie, it was allll about that stunning cover.

He’s going to a place he’s never been before: home. Moon 2 is a space station that orbits approximately 250 miles above Earth. It travels 17,500 miles an hour, making one full orbit every ninety minutes. It’s also the only home that fifteen-year-old Leo and two other teens have ever known. Born and raised on 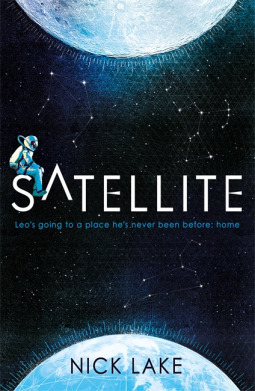 Moon 2, Leo and the twins, Orion and Libra, are finally old enough and strong enough to endure the dangerous trip to Earth. They’ve been “parented” by teams of astronauts since birth and have run countless drills to ready themselves for every conceivable difficulty they might face on the flight.

That’s part of the blurb. But what is interesting is that if blurbs are supposed to be a taster for what is inside the book, then this back-book matter should be written in text-speak because Lake has taken the brave decision to write this near-future adventure in this format, complete with no capitals except for names. It took me a couple of pages to get comfortable with this format, but I’ve read a string of reviews from indignant readers who simply couldn’t cope. That’s a real shame, because they missed a cracking story as a result. And to be honest, I’m not sure this step was worth it, given it certainly posed an additional barrier to accessing the story.

Leo is a rather self-contained character, who is always an outsider – he’s bound to be given he is raised in a space station alongside a set of twins. When he sees his mother, which is infrequently, she never shows him any affection – not so much as a hug, let alone playing games and reading to him like Orion and Libra’s mother during her visits. At fifteen, Leo tells himself that he has become used to her attitude, while readying himself for his return to Earth. I loved his personality, which is important as this tale is told in first person viewpoint. Lake managed to denote his emotions, while we are also aware he doesn’t wear his heart on his sleeve. Given the nature of his upbringing, he is wary of people and their motives, which stands him in good stead once he finds himself back on Earth.

Leo’s wonder at the beauty he encounters is wonderfully conveyed as he begins to acclimatise to gravity while living on his grandfather’s cattle ranch. But all too soon, his life there becomes disrupted. Earth is in trouble. Water and food are running out as global warming is drying up farmland and turning swathes of the landmass into desert. There are dangerous factions abroad who would like to get their hands on one of the famous space-born children…

As events stack up and the story turns a whole lot darker, I found it hard to put this one down. The scenario portrayed is chillingly plausible, which sharpened the sense of distress at the children’s plight. However, after carefully building up a realistic sense of the near-future, this adventure suddenly takes a sharp left-turn into a plotpoint more suited to Hollywood silliness. I wouldn’t have minded so much, but I could easily visualise an alternative scenario that wouldn’t have entailed all that nonsense and still given more or less the same ending.

So while I coped with the text-prose, I have marked this down from a five-star rating to a four-star novel, because I strongly felt that one final action scene at the end was entirely unnecessary and distracted from some of the hard ethical questions this thoughtful story raises. But don’t that discourage you from reading this one – it’s a gripping story with a hard-hitting message and left me with a lump in my throat, notwithstanding that final act.
8/10