Nahri’s life changed forever the moment she accidentally summoned Dara, a formidable, mysterious djinn, during one of her schemes. Whisked from her home in Cairo, she was thrust into the dazzling royal 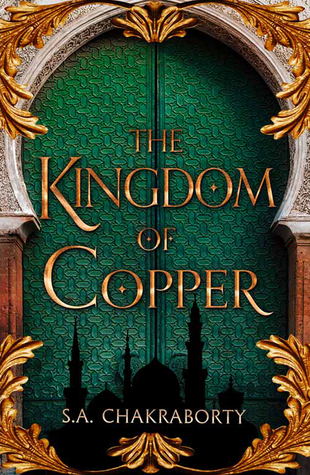 court of Daevabadand quickly discovered she would need all her grifter instincts to survive there. Now, with Daevabad entrenched in the dark aftermath of the battle that saw Dara slain at Prince Ali’s hand, Nahri must forge a new path for herself, without the protection of the guardian who stole her heart or the counsel of the prince she considered a friend. But even as she embraces her heritage and the power it holds, she knows she’s been trapped in a gilded cage, watched by a king who rules from the throne that once belonged to her familyand one misstep will doom her tribe.

I hadn’t read the first book and I’m sorry about that – not because I was floundering at any stage – but because this one was such a thumping good read, I wish that I had started the adventure in the right place in order to get the maximum enjoyment from it. As it was, crashing into the series in the wrong place wasn’t a problem. Chakraborty not only ensured that any previous details necessary to make sense of the story were already included, there is also a very helpful glossary and cast of characters at the back, giving helpful details of the world and the complicated rivalries that run it.

I really liked Nahri, which was important. But what particularly impressed me in this sweeping story were the inclusion of the history of bloodshed and atrocities on both sides that powered everyone’s current mindset. It was a grimly realistic take on the politics and gave an explanation for the violence perpetrated, if not the justification.

I’m aware that I have given the impression that this is a gritty book full of anger and angst. While there is plenty of tension and plotting going on, there are also lovely descriptions of the world, and plenty of light and colour in amongst the excellent action scenes. I can now see what all the fuss was about regarding the first book, The City of Brass, which I will definitely be getting hold of and I look forward to also reading the final book, The Empire of Gold, in this excellent trilogy. Highly recommended for fans of sword and sorcery stories.

While I obtained an arc of The Kingdom of Copper from Netgalley, the opinions I have expressed are unbiased and my own.
9/10