Regular visitors to this site will know that I am a fan of Edwards’ writing. She has written several entertaining YA science fiction series – the best-known being the Earth Girl series, see my review of Earth Girl. The Hive Mind series, featuring the adventures of telepath Amber – see my review of the first book, Telepath – has also become a solid favourite, so I was delighted when the author contacted me and asked me to read a review copy of Hurricane in return for an honest opinion of the book. 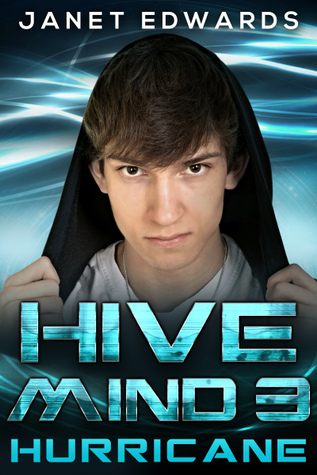 of one of the great hive cities of twenty-sixth century Earth. Her job is hunting down criminals before they commit their crimes, but this time a simple case leads on to something far bigger. This is a case where Amber’s team have to face the unknown and break all the rules they usually follow, while Amber has extra burdens she can’t share with anyone. She has a personal mystery to solve, and questions she wants answered, but curiosity is a dangerous trait in a telepath.

As with all Edwards’ books, we see the world through the viewpoint of the young protagonist, so we only know what she knows, therefore I was delighted that Hurricane gives us more information about the worldbuilding. It appears – this will doubtless come as a great shock to you – that the leaders of the Hive aren’t completely honest with their citizens and keep secret some important details about how the society functions.

In this interesting instalment, Amber and her team find themselves solving a major crime outside the Hive where she learns a lot more about a hitherto hidden aspect of the workings of the Hive. Obviously, I’m not going to reveal those aspects as I’d be straying into Spoiler territory, but a lot more things made sense regarding the longterm viability of the society which wasn’t bothering me, but had concerned Himself. Alongside my increased understanding of this intriguing post-apocalyptic setup, Edwards also delivers another tension-filled crime adventure featuring a series of malicious attacks that trip into something far darker and more harmful. It is Amber’s task to discover who the murderer is by reading the culprit’s intention – far harder when everyone’s mental landscape differs so markedly from what she’s used to. And there are potentially dire consequences if she cannot find the perpetrator, so there’s plenty at stake.

I’ve enjoyed following Amber’s story from the beginning and though it is only eight months since the events of the first book, she has significantly matured – hardly surprising given the responsibility she is shouldering. There is also an intriguing sub-plot surrounding one of the other telepaths, which gives us an insight into what can happen when things go wrong.

This society is under enormous pressure, given that the population density is very high and the authorities are keen for everyone to feel a reasonable degree of happiness – if they didn’t, then mayhem would quickly ensue. I’ve found myself thinking a lot about this book since I’ve finished reading it – always a sure sign that it’s something a bit special that’s delivered above and beyond the engrossing story that held me throughout. Highly recommended for fans of enjoyable YA science fiction, this is the best of the series so far.
10/10