This meme was started by Books by Proxy, whose fabulous idea was to compare UK and US book covers and decide which is we prefer. This meme is currently being nurtured by Lynn’s Book Blog and the subject this week featuring on any of our covers is A HORROR NOVEL, so I’ve selected The Graveyard Book by Neil Gaiman. 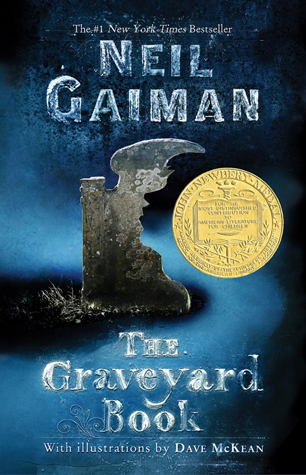 This edition was produced by HarperCollins in September 2008. I really like this one – the blue-black background is both effective and attractive and the gravestone is striking. But what stands out is the treatment of both the title and author fonts, which I love. And then they go and RUIN it by plastering that large gold blob right in the centre! Couldn’t it have gone in a corner? Just asking…

Published in December 2008 by Bloomsbury, this cover is the exact opposite of the above cover. Rather than going for the minimalist approach, this cover is full of wonderful detail, featuring the two main protagonists scowling out at prospective readers. I could have done without the endorsement by Diana Wynne Jones impinging onto that glorious artwork, but overall I like this one, including the funky title font. This is the cover of the copy we own. The big problem with it is that it doesn’t look good in thumbnail.

This Spanish edition, published by Roca Editorial in October 2010. I really like it – the design is  clever, featuring the blade of a knife with the cityscape running along its length and young Bod running along the edge of it. I think it’s attractive and eye-catching – and again the author and title fonts look fabulous. However, the snag for me is that there is no graveyard in this cover, which features so heavily in the book – and the title.

Produced by Polaris in September 2008, this Czech cover does feature a graveyard. I like the design and appreciate that the ghosts also feature. However, unfortunately the execution of the otherworldly characters lets down this cover – they look like they’ve been painted onto material and then photoshopped into the cover. It’s such a shame, because I think the idea and the rest of the image is really strong. 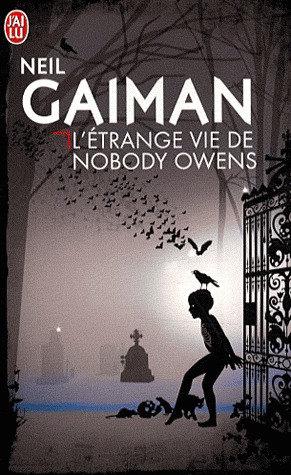 This French edition, published by J’ai lu in April 2012, is also set in a graveyard and I love it. I think it’s the strongest of all the designs. It sings off the page with the eerie lighting and the silhouetted figure of the small boy against the wrought iron gates of the graveyard looks fabulous. This is mine – but which is your favourite?