I really enjoyed this first book in this YA paranormal series, Select – read my review here – so when I saw the second book was available, I immediately requested it and was delighted to be accepted. 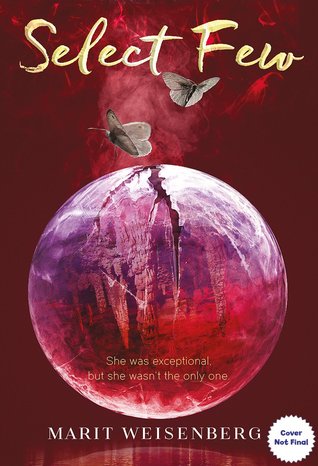 After rejecting the cult-like influence of her father’s family, Julia moves into a fancy hotel in downtown Austin. But she finds herself alone except for her boyfriend, John–and her fears. The FBI is also keeping a close eye on Julia hoping she can lead them to her father, Novak, as he’s wanted for questioning in his former assistant’s death. Will she ever be able to blend into normal society without being traced by her father? Will the FBI ever leave her alone? Can she ever find happiness?

I have once again made major changes to the very chatty blurb, and my advice is – don’t read it before picking up the book. The first book ended on something of a cliffhanger with a sudden revelation right at the very end, which turned everything on its head and had Julia making a snap decision not to join her family in their flight to a new life. So the start of Select Few has Julia coming to terms with that decision, after realising the enormity of her loss. She now has to make her way without her sister, whom she loves and misses and her overbearing authoritarian father. While at times she has revelled in her new freedom, she has also discovered that freedom is often accompanied by loneliness. Her relationship with John is also problematical, given that revelation at the end of the first book, so while her feelings for him are a comfort, he is often at a loss to understand her behaviour.

The reason I can discuss John’s feelings with such authority is that this book is a dual narrative with Julia’s first-person viewpoint telling most of the story, interleaved with John’s observations, addressed directly to Julia in the form of some kind of journal. If you haven’t read Select I recommend you do so if you are not feeling particularly bonded with the main characters, or you cannot work out what is going on. Given the first slice of the story is taken up with what is happening, I think this is one of those series where you really can’t crash midway in the series without floundering – and that would be a shame as I found the early part of the book particularly gripping while I tried to work out where it would go next.

Of course, if you are held at the start, the build-up has to really lead something – we’ve all read books which start with a bang and simply can’t sustain the momentum. Fortunately, Weisenberg has sufficient story and drive that the climax and final stages bring the book to a satisfying and convincing end.

I wasn’t as fed up with the inevitable love triangle as I usually am, and to be honest, I’m not sure why. But perhaps it was because I was sufficiently caught up in the main story and found the road trip also helped Julia comes to terms with some important issues along the way. Recommended for fans of paranormal coming-of-age books. While I obtained an arc of Select Few from the publisher via Netgalley, the opinions I have expressed are unbiased and my own.
8/10