I read and thoroughly enjoyed The Beautiful Ones by Moreno-Garcia – see my review here – so when I caught sight of this novella on Netgalley, it was a no-brainer. 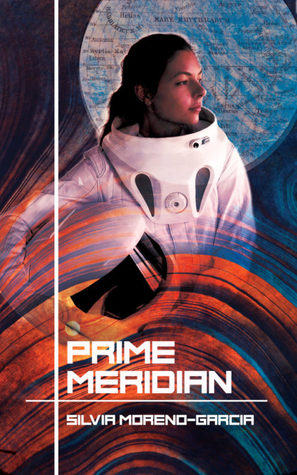 Amelia dreams of Mars. The Mars of the movies and the imagination, an endless bastion of opportunities for a colonist with some guts. But she’s trapped in Mexico City, enduring the drudgery of an unkind metropolis, working as a rent-a-friend, selling her blood to old folks with money who hope to rejuvenate themselves with it, enacting a fractured love story. And yet there’s Mars, at the edge of the silver screen, of life. It awaits her.

I’m not sure what exactly I was expecting – but it wasn’t this. Less escapist space opera and far more dystopian, very-near-future, this novella packed a punch. I’ll be honest – given what else was going in my life, this was not the read I would have chosen to pick up. But I’m glad I did.

Amelia has edges – and quite right, too. So would I if I’d endured the lack of opportunity and dead-end options facing her. She has fixated on going to Mars – right from the time she was old enough to be ambitious and despite having had a series of unlucky breaks, she still is determined to get there. It’s the only thing that really matters… so it is painful to read of her constant struggles that seem to go nowhere. She is constantly angry and hostile to those around her – not ideal when one of her hard-scrabble jobs is to sell her companionship in response to an app.

The world is richly depicted – which seems to be Moreno-Garcia’s trademark, along with indepth characterisation that doesn’t impede the storyline. She nearly has the pacing nailed, but I did feel the ending was a tad hurried in comparison to the rest of the story. Having said that, novellas are fiendishly difficult to get right.

I enjoyed the story and the awkward dynamic between Amelia and the rest of the characters. The times when she is most at peace with herself and those around her, are when thinking of Mars, or watching the movies with an ageing actress who employs her to listen to her past. And if you think that sounds rather poignant, you’d be right.

I would love to read a sequel to this thought-provoking story as I find myself wondering about the character and what happens next. Recommended for fans of literary fiction. While I obtained an arc of Prime Meridian from the publisher via Netgalley, the opinions I have expressed are unbiased and my own.
9/10