I picked this one up because the author is one I enjoy – as well as writing this historical murder mystery series, he also has written a number of successful science fiction novels. Indeed, Engineman 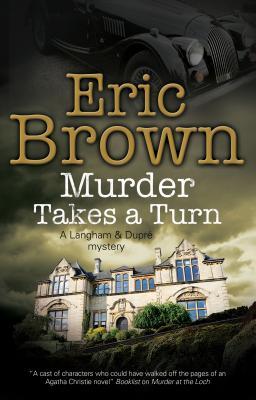 , has one of the most memorable backdrops I’ve encountered in science fiction, outside a C.J. Cherryh novel.

When Langham’s literary agent receives a cryptic letter inviting him to spend the weekend at the grand Cornish home of successful novelist Denbigh Connaught, Charles Elder seems reluctant to attend. What really happened between Elder and Connaught during the summer of 1917, nearly forty years before – and why has it had such a devastating effect on Charles? Accompanying his agent to Connaught House, Langham and his wife Maria discover that Charles is not the only one to have received a letter. But why has Denbigh Connaught gathered together a group of people who each bear him a grudge? When a body is discovered in Connaught’s study, the ensuing investigation uncovers dark secrets that haunt the past of each and every guest – including Charles Elder himself …

And if the cover and tone of the blurb remind you of an Agatha Christie novel, you’re absolutely right. The way the book unfolds is clearly a nod in the direction of the Grand Dame of Crime. I liked the main protagonists – it’s a refreshing change to have a dear old chap like Charles Elder right in the middle of things and his business partner Maria and her husband Donald are the couple who doing the sleuthing on this case. The location – a country house in an isolated part of Cornwall – is classically cosy mystery and the method in which the unfortunate victim dies is suitably macabre.

This is an ideal summer holiday read, which plenty of twists and turns and an entertaining variety of possible suspects. I did guess the identity of the murderer before the final big reveal – but only because I read all Agatha Christie’s novels longer ago than I care to think. That said, it didn’t put a huge dent in my enjoyment, because this was more about being bathed in the experience of revisiting an imagined past that I’m sure never existed – although I wished it had. Recommended for fans of well written historical cosy mysteries.
8/10