When done well, there is no genre I love more than science fiction – I’m not sure why except there is something about a cracking well-told tale out in the stars that speaks uniquely to my soul… I loved Planetfall and After Atlas – so would this final instalment live up to the astonishing standard Newman has set so far? 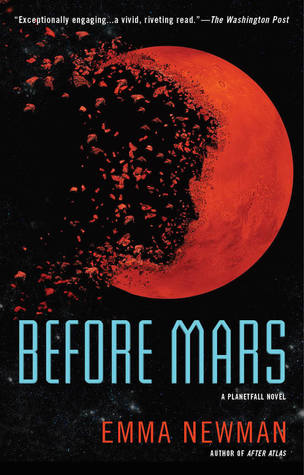 After months of travel, Anna Kubrin finally arrives on Mars for her new job as a geologist and de facto artist-in-residence. Already she feels like she is losing the connection with her husband and baby at home on Earth–and she’ll be on Mars for over a year. Throwing herself into her work, she tries her best to fit in with the team. But in her new room on the base, Anna finds a mysterious note written in her own handwriting, warning her not to trust the colony psychologist. A note she can’t remember writing. She unpacks her wedding ring, only to find it has been replaced by a fake.

Once again what hooked and then held me, is Newman’s nuanced and layered characterisation. I found Anna a deeply poignant character, who ends up on Mars as much because she is escaping her former life, rather than due to the fact that joining the tiny colony has been a lifetime’s achievement. Her struggles to come to terms with her post-natal depression, which prevented her from fully bonding with her baby really held me – it is an issue which isn’t written about nearly enough in SFF. Kudos to Newman for providing such a sympathetic, poignant insight into the struggles some women encounter in the weeks, months and years after having a baby.

I’m conscious that I’ve managed to make this one sound like it’s all about a rather broken woman wandering around and agonising about the baby she has left behind on Earth. While that is a minor story strand – actually, this book is a tense thriller whereby the newest visitor to a small scientific community cannot shake the sense that something is very badly wrong… I had figured out some of what is going on – but as ever, Newman has a number of other twists I didn’t see coming.

In addition, there is a strong supporting cast featuring the other characters who are also on the Mars base alongside Anna. I really appreciate the fact that there are no out and out villains – and the one character who has not behaved particularly well comes across as weak and out of their depth, rather than evil. As ever, after I put this one down, I found myself constantly thinking about it – and wondering how I’d feel in the same situation.

Like the other two books, this one can comfortably be read as a standalone. In fact, I’m not sure it wouldn’t be more satisfactory to do so – after that amazing cliff-hanger ending of After Atlas I kept waiting for the shoe to drop. I generally don’t reread anything – there are too many other fabulous books out there waiting for me. But this is the first time in a long while I’ve been strongly tempted to read through the whole trilogy, one after the other… Highly recommended for anyone who loves a gripping adventure featuring a well written, complex protagonist.
10/10