I’m a solid fan of this author’s work – see my review of The Hadrumal Crisis – and have always enjoyed the politically aware worldbuilding and sharp characterisation of her epic fantasy novels, all set in the same world. This one, however, is a complete break from her former body of work. This is, in effect, a very Brit take on the urban fantasy sub-genre, where the supernatural world interacts with the human version in trying to get to the bottom of a crime. But instead of grimy city streets, the setting is an English stately home and instead of the usual fare of vampires and werewolves, we have dryads, boggats and wyrms…

A hundred years ago, a man with a secret could travel a few hundred miles and give himself a new name and life story. No one would be any the wiser, as long as he 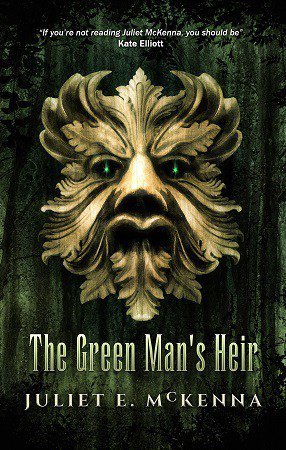 didn’t give anyone a reason to start asking questions. These days, that’s not so easy, with everyone on social media, and CCTV on every street corner. So Daniel Mackmain keeps his head down and keeps himself to himself. But now a girl has been murdered and the Derbyshire police are taking a closer look at a loner who travels from place to place, picking up work as he goes. Worse, Dan realises the murder involves the hidden world he was born into. When no one else can see the truth, who will see justice done?

A modern fantasy rooted in the ancient myths and folklore of the British Isles.

And she has absolutely nailed it. This is a complete and utter joy. I loved the character of Daniel, part-dryad, who is desperate to meet up with others in his situation and when he finally tracks down someone who can help – it doesn’t end well… He is a sympathetic protagonist with a few chips on his shoulder – not surprising given his heritage and how it has caused him problems. He is tall, well-built and innately attracts women. While that might sound like dream attributes, in reality it has caused him a lot of problems with annoyed boyfriends and brought unwelcome attention from the police, when such incidents turn into brawls.

I love the setting of a country district – McKenna has got the social faultlines running through modern England spot on. While the beautiful setting, juxtaposed with the grim threat reaching back into history and now posing a possibility of creating havoc all over again, works beautifully. This one grabbed me and wouldn’t let me go until I put it down in the wee small hours, drained and slightly giddy.

The book hangover I’ve had since has been painful, because despite reading perfectly enjoyable, well written adventures, they haven’t been this world, with these characters. I want them back. I want more. And I’m hoping, fervently, that McKenna has plans to make this a series, because I’m already addicted.

Recommended for fans of urban fantasy and murder stories with a very cool paranormal twist.
10/10