This meme was started by Books by Proxy, whose fabulous idea was to compare UK and US book covers and decide which is we prefer. This week the theme is a cover featuring a seeds or spores, so I’ve selected The Seeds of Time by John Wyndham. 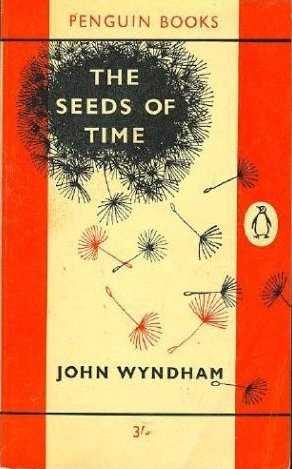 This edition was produced by Penguin in 1959 and I do like it as a piece of history more than because I think it’s a great cover. It has the generic Penguin orange and white cover with an additional dandelion clock moulting seeds which is reasonably effective though not particularly imaginative or exciting. An average effort.

Published in 1964 by Penguin, at least this cover displays a modicum of imagination. The lime-green cover is eye-catching and attractive, though the artwork would have looked better if it had been in black, which would have contrasted well with the cover. As it is, it’s a struggle to make out what is going on. 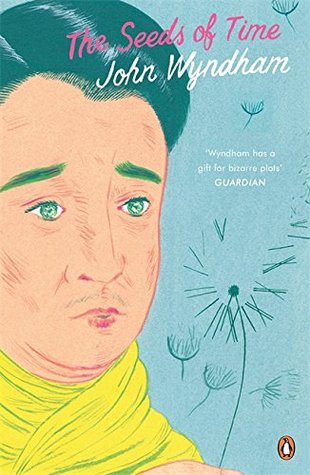 This edition, published by Penguin in September in 2014, is evidently going for the retro look, judging by the looping font and eggshell blue background. The snag is, the face is far too poorly executed to be the work of the average cover artist of the time. I cannot even work out if it is supposed to be a man or woman…

This Spanish edition, produced by E.D.H.A.S.A. in 1958, is certainly a huge improvement on any of the previous efforts. The quirky abstract design fits the tone and style of a science fiction short story collection, while the colours are attractive and eye-catching.

This cover, published in 1988 by Penguin, is at long last a worthy effort. The spacescape featuring a nicely exotic space ship and a planet – presumably Earth either emerging into daylight or being plunged into darkness immediately alerts a prospective reader as to the genre. And Wyndham’s name is also attractively highlighted, which certainly makes marketing sense, given his fame as the author of The Day of the Triffids. This one gets my vote, with the Spanish edition a very, very close second. Which is your favourite?

Error: Twitter did not respond. Please wait a few minutes and refresh this page.