94% The two men clashed like a hammer striking an anvil, and sparks and shards of ice flew from their 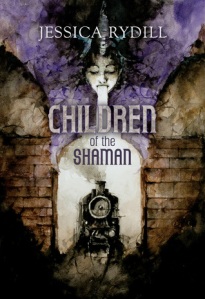 blades. Yuda knew his own strength and his weakness; he did not stay locked with Sarl, but darted back, mocking him with speed and lightness of foot. When Sarl strode after him, he returned to the attack, searing the icy armour with tongues of fire.
Sarl spun, cursing like a man plagued with a gadfly, but Yuda was always just out of reach of his whirling swords.

BLURB: When their aunt is taken ill, thirteen-year old Annat and her brother are sent from their small coastal town to live with their unknown father. Like Annat, Yuda is a Shaman; a Wanderer with magical powers, able to enter other worlds. As Annat learns more about her powers, the children join their father on a remarkable train journey to the frozen north and find a land of mystery and intrigue, threatened by dark forces and beset by senseless murders that have halted construction of a new tunnel.

This is one I’ve had on my Kindle for far too long – so I decided to tuck into it. It has proved to be a marvellously engrossing read with lots of unexpected twists in a vividly depicted world. I will definitely be getting hold of the others in the series.