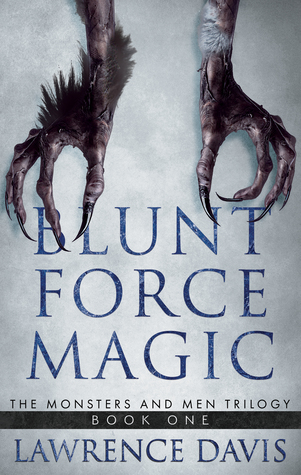 Janzen Robinson is a man lost between two worlds. Five years removed from a life as an apprentice to a group of do-gooding heroes who championed the fight against supernatural evils, the once-promising student is now a package courier going through the daily grind, passing time at a hole-in-the-wall bar and living in a tiny, run-down apartment on the south side of Cleveland, Ohio. Then fate (or a case of bad timing) brings him face to face with a door that’s got his old life written all over it. From the ancient recesses of unyielding darkness known as the Abyss, a creature has been summoned: a Stalker, a predator whose real name is forbidden to be spoken aloud. It’s a bastardization of the natural order, a formidable blend of dark magic and primal tenacity. Its single-minded mission? Ending the life of a fiery, emerging young witch.

Though the cool cover shouts otherwise – at least to me, who thought this was going to morph into epic fantasy, this story is very much within the urban fantasy genre. That said, there are some striking differences that make this one stand out. Yes, Janzen has been selected as an apprentice due to his natural talent – however, that was a while ago. In the meantime, something terrible has happened to his mentor and he has spent the last five years just getting by. Therefore, while he does have raw talent, there is relatively little skill or finesse in his workings. I really like the idea that he is only half trained and that because of his chippy, mouthy character, he is also tricky to help, as he is often his own worst enemy.

That doesn’t stop him plunging into a desperate situation against a very dangerous opponent without too much thought about the consequences. This is partly due to his own bloody-minded nature and partly due to the survivor guilt he still feels.

While I’m always wary of assuming authors necessarily shoehorn their own lives into their writing, I was interested to read that Davis is a war veteran who served in Iraq. The young soldier who befriends Janzen is very well depicted and all the action scenes are effective and realistic.

In short, this one held me throughout. I liked the dynamic and the fact that there was no romantic relationship running throughout – a refreshing change in urban fantasy, these days. I also liked the scrabbling, somewhat desperate nature of Janzen’s opposition to the nasties ranged against him. I particularly appreciated the monsters – especially the stalkers, which are truly terrifying creatures.

All in all, this is a thoroughly enjoyable new series and I very much look forward to reading another slice of Janzen’s adventures – I hope Davies writes quickly. While I obtained an arc of Blunt Force Magic from Netgalley, the opinions I have expressed are unbiased and my own.
10/10

A Simpler Way to Finance