This meme was started by Books by Proxy, whose fabulous idea was to compare UK and US book covers and decide which is we prefer. This week the theme is a cover featuring stairs, so I’ve selected Murder Must Advertise – Book 10 of the Lord Peter Wimsey series by Dorothy L. Sayers.

This cover, produced by HarperTorch in May 1995, is boringly generic. They have taken one of the original images and plonked it into the middle of a white cover. The best part of this cover is the period feel of the font, which is well done.

This edition was produced by Four Square Books in 1962 and is a far better effort. There is a real sense of drama conveyed by the crumpled body at the bottom of the twisting staircase with all the advertisements behind him on the wall. My big quibble with this cover is that ugly black block for the title font – if it wasn’t for that, this one would be my favourite. 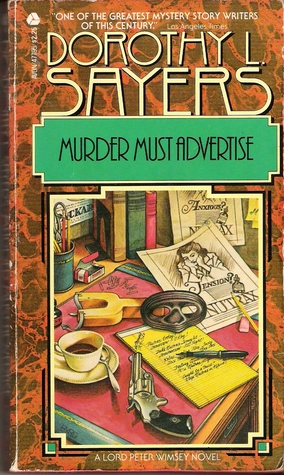 Published in 1967 by Avon Books, this edition is my favourite. I love the marble effect of the cover and the lovely art deco effect produced on both the image and the fonts for the author and title, which look as if they have actually been designed to complement each other. 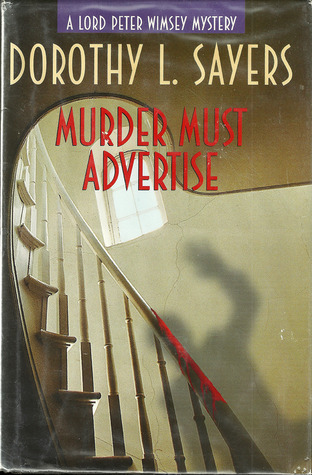 This edition, published by HarperPerennial in 1993 is another good effort. The staircase looks far more seedy and shadow of the hapless victim on the wall while falling to his death gives a rather creepy feel to the cover.

This Dutch edition, produced by Uitgeverij Het Spectrum is another blast from the past as it was produced in 1961. I like the punchy effect of the cream and black against the red, which I think would have been a much stronger colour before it faded with age. The figure falling headfirst down the stairs gives lots of drama to the cover, making it appealing and eye-catching. Which is your favourite?