This is my choice of the day:
Into the Fire – Book 2 of Vatta’s Peace by Elizabeth Moon

18% “Pods aren’t equal,” Ky said, scowling at the tiny figures in the drawings then back to the 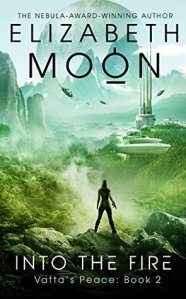 descriptive text. “And there’s another level. Look—the ground-level rooms have the nice beds and so on … the upper one, the rooms are smaller, thicker-walled, no windows. Described as ‘treatment rooms for more severe conditions.’”
“Perfect for isolating problem people,” Rodney said.

BLURB: When Admiral Kylara Vatta and a ship full of strangers were marooned on an inhospitable arctic island, they uncovered secrets that someone on Ky’s planet was ready to kill to keep hidden. Now, the existence of the mysterious arctic base has been revealed, but the organisation behind it still lurks in the shadows, doing all it can to silence her.

I loved the first book, Cold Welcome, in this spinoff series from Moon’s successful Vatta’s War series and so far, I’m thoroughly engrossed in this one, too. Though I do think if you haven’t read the first series, you could probably be struggling with the raft of characters that hadn’t made an appearance in Cold Welcome.