This meme was started by Books by Proxy, whose fabulous idea was to compare UK and US book covers and decide which is we prefer. This week the theme is featuring a psychedelic cover, so I’ve gone with Life of Pi by Yann Martel. To be honest, I’m not sure if these covers are particularly psychedelic – but I love the swirling patterns, so went for them anyway.

This cover, produced by Penguin Random House in 2011, is my favourite. I just love the clever use of pattern with the dark blue and black swirls – and it wasn’t until I looked a bit more closely, I realised the detail of the boy represented the tiger’s eye. I am also delighted the publisher chose not to smother the clever, classy design with a load of blurb.

This French edition was produced by Gallimard Education in November 2009. I would like the swirling tiger stripes far more if there wasn’t that great big ugly blue block bang in the middle of the cover sporting a very boring font for both title and author. That blue strip is at least twice the size necessary and I’m trying hard to think of any reason why anyone would think it is anything other than scabrous blot on an otherwise attractive design. 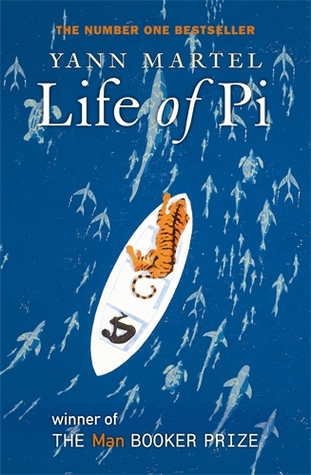 Published in May 2003 by Canongate Books, this is one of the most popular cover designs for the book and rightly so. You might not think that is a big deal, but there are dozens of different covers for this book – I was spoilt for choice. I happen to like this one very much. Not only is it eye-catching and attractive, it very deftly sums up the plight of the main character in a startlingly effective way.

Produced in November 2012 by Canongate, I’m guessing this is the cover of the film. That said, it is both striking and attractive while managing to keep spurious details about the film to the bare minimum. If there weren’t other such strong contenders, this one would be in the running.

This offering, published in May 2004 by Mariner Books/Harvest Books, is another lovely cover with that fabulous sky and seascape featuring the boat. I very much like the subtle detailing around the edge and again, I appreciate the economy of the title and author fronts. All in all, while I may not have hit the brief with sufficient psychedelia, I think this week I have a series of rather lovely covers. Which is your favourite?