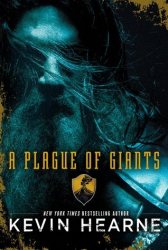 then tosses out a wish for me to “be well,” which is more alarming than the news of my army’s destruction. People are beginning to notice. To question my health. My sanity! My fitness to rule.

BLURB: In the city of Pelemyn, Fintan the bard takes to the stage to tell what really happened the night the giants came . . .

From the east came the Bone Giants, from the south, the fire-wielding Hathrim – an invasion that sparked war across the six nations of Teldwen. The kingdom’s only hope is the discovery of a new form of magic that calls the world’s wondrous beasts to fight by the side of humankind.

This epic fantasy has an interesting structure – we learn about the unfolding drama as a volcanic eruption triggers a major and unwelcome migration of a people through a magically enhanced bard. He recites the story of what happens, complete with the resulting political fallout to a bulging city of refugees, taking on the persona of the various key characters through his magical gift, or ‘kenning’. I’m enjoying it – though having to really concentrate to keep track of the eleven protagonists that keep popping up. Himself has raved about this one, so I’m looking forward to a climactic ending…