This meme was started by Books by Proxy, whose fabulous idea was to compare UK and US book covers and decide which is the one we prefer. This week the theme is dragons, so I’ve chosen Tooth and Claw by Jo Walton.

This cover, produced by Tor Fantasy in December 2004, is a rather splendid dragon. Definitely eye-catching and I like the fact that he is clearly expecting to be served. If I’m going to be picky, the backdrop looks like a generic fantasy landscape – and this book is set in an alternate Victorian England where dragons are vying with each other for power and influence after the style of Trollop. So the backdrop doesn’t line up very well with the content. Other than that, I think it’s a solidly good cover. 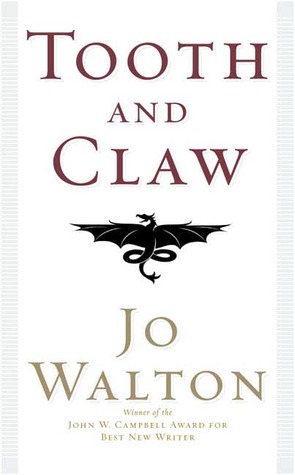 This offering was produced by Orb Books in January 2006. I have to say my first instinct is ‘how boring’. A WHITE cover… really? And that very generic dragon didn’t really take a lot of effort. There’s nothing innately wrong with it, but when I consider just what an awesomely sharp, funny and memorable book this is – the cover simply doesn’t measure up. 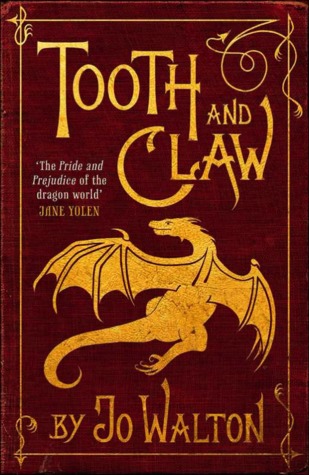 This cover from Corsair was published in February 2013 and is far more like it! The deep rich crimson and embossed gold lettering and wheeling dragon is both classy and eyecatching. This is the edition that I read, so that also may affect my reaction to it – but the reason I picked it up off the shelf was because the cover caught my eye…

Produced in September 2017, this French edition by Denoël also features gold lettering and decoration. The background is darker, but I suppose they are going for a classic Victorian feel. I also like the visual impact of this one, though I doubt it gives the reader much idea about the story or genre of this very quirky, entertaining book. 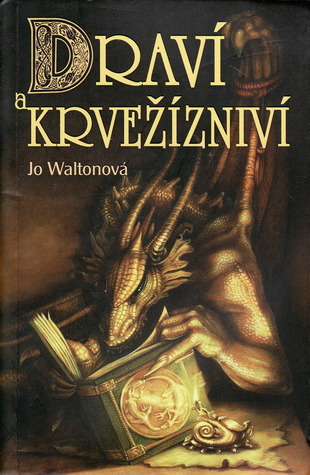 This edition, published in 2006 by Triton is my favourite. I love the wonderfully detailed illustration. The power and menace emanating from that dragon is palpable, while the lettering looks beautiful. And the fact this dragon is engrossed in a book gives a major clue about the story. What about you? Which one of these do you prefer?

AAAND… some of you may know that my debut novel, Running Out of Space was published this week. Today I am featuring in a guest blog at Second Run Reviews talking about growing up during the space race – and how I felt when it all came to a halt.