This meme was started by Books by Proxy, whose fabulous idea was to compare UK and US book covers and decide which is the one we prefer. This week the theme is black and white covers, so I’ve chosen Blackout – Book 1 of the All Clear series by Connie Willis. 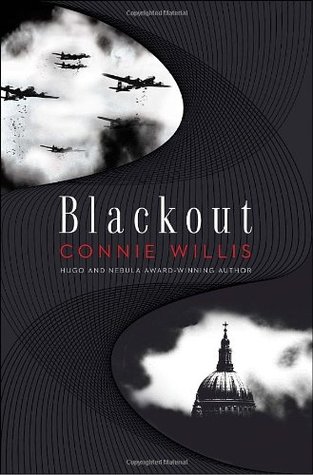 This cover produced by Spectra Books in February 2010 is the original. I love the way we get small bubbles of action in amongst the shifting dark pattern – an attractive design that nicely echoes the content of this time-travelling adventure. This one is my favourite. 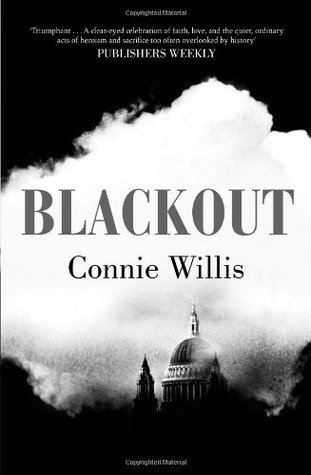 This offering was produced by Gollancz in June 2011 and is another strong contender. The cloud revealing the London skyline from the surrounding black cover is another strong, simple design that is both eye-catching and effective.

This French edition was published by J’ai lu in March 2014. The iconic view of Westminster surrounded by smoke smearing the sky would certainly make me look again and though I’m not a fan of solid blocks of colour as a backdrop for the title and author, this time the blue works very well. 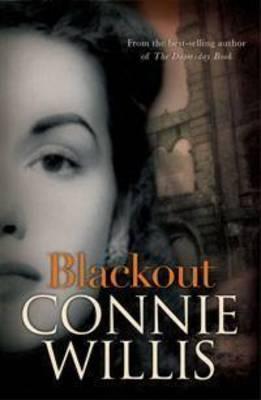 Produced in September 2010 by Allen and Unwin, this Kindle edition is another successful effort. The greyscale shading works well as the girl is unmistakeably from the late 1930s/early 1940s. The red tinge near the top of the cover just behind the ruin gives a slight sense of menace – and a big clue as to the setting of the book. 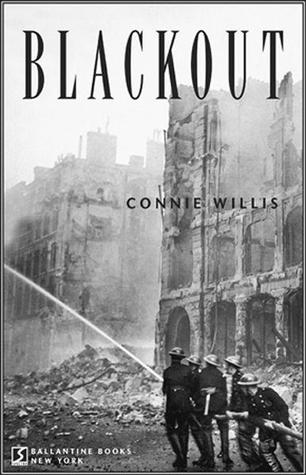 Published in February 2010 by Spectra Books, this hardback edition is the most generic of the covers and my least favourite. It has clearly been taken from a photograph of the time and I think the overall design is further weakened by a rather limp title font. Which cover do you like best – and which is your least favourite?

After enjoying the hippo-related mayhem of River of Teeth and looking forward to reading what happens next as the first book left everything on something of a cliffhanger, I was delighted to spot this one on Netgalley. 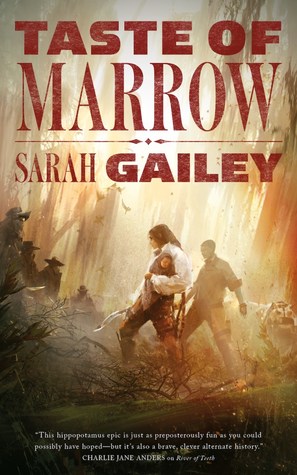 A few months ago, Winslow Houndstooth put together the damnedest crew of outlaws, assassins, cons, and saboteurs on either side of the Harriet for a history-changing caper. Together they conspired to blow the damn that choked the Mississippi and funnel the hordes of feral hippos contained within downriver, to finally give America back its greatest waterway. Songs are sung of their exploits, many with a haunting refrain: “And not a soul escaped alive.” In the aftermath of the Harriet catastrophe, that crew has scattered to the winds. Some hunt the missing lovers they refuse to believe have died. Others band together to protect a precious infant and a peaceful future. All of them struggle with who they’ve become after a long life of theft, murder, deception, and general disinterest in the strictures of the law.

My first piece of advice would be – don’t start with this one, go back to River of Teeth as this novella picks up from where the first book left off and there isn’t anything in the way of ‘The Story So Far’. While there is a bit of explanation about what happened, it comes fairly late in the story and in the meantime, I think newcomers to this series could flounder.

As we plunge straight back into the action only a few weeks after the climactic events at the end of River of Teeth we meet up with all the protagonists once again as they start to count the cost of that dramatic day. It took me a while to get back into this, because not only wasn’t there much explanation, neither did we have any rebonding moments with the main characters. I did care about several of the gang members, but was rather detached from Winslow, whose behaviour wasn’t particularly pleasant. While I understood it, because the reason for it was in the previous book, we didn’t get a chance to see the justification and I think this hampered some of my enjoyment.

I do like the world very much and there was plenty going on – but I wanted more character development and longer to enjoy this interesting, vivid setting. There was a sense that this was a quart-sized story squeezed between pint-sized covers. That said, if I hadn’t liked it so much then clearly I wouldn’t have wanted more – this is really cool idea and was brought to a satisfactory conclusion this time around. I’d love to see a full-length novel set in this world, though… While I obtained the arc of Taste of Marrow from the publisher via NetGalley, this has in no way influenced my unbiased review.
8/10