I was delighted when the author contacted me and asked if I would like to review this latest adventure, as I had posted a review of her previous book in the series Change of Life. 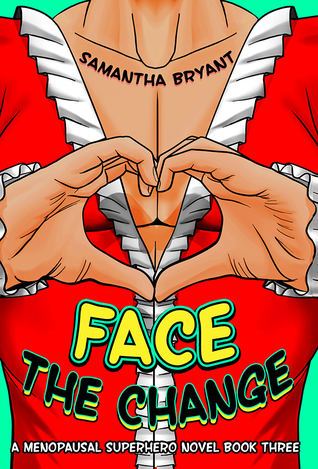 The Menopausal Superheroes are coming out of the closet and the pressure is high, on the job and on the homefront. Now that he knows what it’s like to be a hero, Leonel “Fuerte” Alvarez can’t imagine going back to his former life as a grandmother and housewife. But putting his life on the line may cost him his husband even while he saves the city. Jessica “Flygirl” Roark is holding on to her second chance at love with both hands while learning to balance single parenthood with her new career in crime-fighting. Patricia “Lizard Woman” O’Neill is blindsided by an unexpected romance just as she signs on to join the team. Meanwhile enemies abound–old and new. When superpowers alone aren’t enough, what a woman really needs are her friends.

I do feel this is one series where a “story so far” prologue would help the reader. As I followed the fortunes of our four protagonists and a couple of formidable antagonists, it took me a while to recall who was doing what to whom. However, once I was back in the flow of this entertaining and unusual take on the superhero genre, I was able to settle back and thoroughly enjoy the story. While the blurb and eye-catching cover give the impression this is a humorous parody, in fact this isn’t the case. Bryant has set up an original scenario whereby for women of a certain age suddenly find themselves endowed with superpowers – what she isn’t doing is playing this situation for laughs.

In a genre which historically has been dominated by the likes of Superman, Spiderman and Batman, Bryant has given us a refreshingly different take on the superhero dynamic when these four women with busy home lives, including grandchildren, and established careers suddenly find themselves dealing with paranormal powers.

The character who has to embrace the biggest change is Leonel who not only is suddenly coping with superstrength, but also coming to terms with also becoming a man. His very traditional husband is finding it difficult when the household chores aren’t done because Leonel is off chasing down baddies. When David demands that Leonel choose between his new crime-fighting career or his marriage, Leonel is anguished at being forced into such a choice and turns to his daughters for help and advice. Whereas Helen, who finds herself able to wield fire with lethal consequences, appears to be affected mentally by her newfound ability and increasingly ignores her daughter. Always a rather brittle, obsessive personality, she is now consumed with fury against those who she regards betrayed her and abandoned her and she is determined to get her revenge.

Bryant gives us interesting insights into how these characters interact as we switch between viewpoints. I am not always a fan of multiple viewpoint, having far too often found that shuttling between a cast of characters means I don’t get a chance to bond or fully understand anyone. That isn’t the case here. Once I got back into the swing of the story, Bryant’s perceptive characterisation built a really interesting dynamic that took this story beyond an escapist romp. The primary antagonist also has problems of her own, having also been caught up in the inadvertent changes her experimentation has caused and I enjoyed following her story in parallel with those people whose lives she has changed forever.

The climactic denouement satisfactorily resolved the narrative while leaving a few plot points dangling for another adventure. At least, that is what I am hoping – I have grown fond of this band of menopausal superheroes and very much hope I can revisit their world. Recommended for readers who enjoy plenty of adventure featuring strong interesting characters.
8/10