I was delighted when I got notification from the local library that this book had come in. Having read the first two books in the trilogy – read my review of The Falconer here – I was more than keen to see where May would take this exciting story to its conclusion. 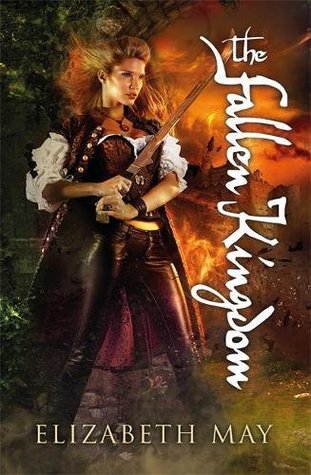 Aileana Kameron, resurrected by ancient fae magic, returns to the world she once knew with no memory of her past and with dangerous powers she struggles to control. Desperate to break the curse that pits two factions of the fae against each other in a struggle that will decide the fate of the human and fae worlds, her only hope is hidden in an ancient book guarded by the legendary Morrigan, a faery of immense power and cruelty. To save the world and the people she loves, Aileana must learn to harness her dark new powers even as they are slowly destroying her.

Firstly, my firm advice would be not to open this one if you have not yet had the pleasure of reading the previous two books, The Falconer and The Vanishing Throne. While you may well be able to pick up what is going on, there is so much backstory you’ll have missed, you will not be getting the best out of this climactic instalment if you do not know what has preceded this final adventure.

After all Aileana has been through during the first two books, we first meet up with her as she newly emerges after her death. She has no idea who she is or what has happened to her. This is more difficult to pull off than May makes it look. The concluding scene of the previous book, The Vanishing Throne, left our protagonist on a real cliffhanger – therefore, it would have been all too easy for the start of this one to have dropped the energy and tension so successfully built up. Fortunately, May is too canny for that to happen. Aileana’s plight immediately gripped me and despite several months elapsing since reading the previous book, I was at once transported back into this shattered, dying world.

As this is the last book, I am unable to comment much on the details of the storyline as I do not wish to provide any spoilers. However, readers who have already enjoyed this series so far, will be relieved to know that Aileana still possesses all her feisty aggression. One of the major causes of tension is the knowledge that her new formidable power comes at a very high price – every time she uses the deadly magic gifted to her, it continues to kill her. In short, she is little more than a primed weapon forged by one of the Fae desperate to avoid the inevitable apocalypse brought on by an ancient curse. May’s detailed world building and magical rules pass almost unnoticed as I grappled with Aileana’s impending doom. For nothing can be taken for granted as May has already shown us she is not afraid to kill off important characters.

The pages flew by as I followed Aileana’s desperate efforts to save the world. Indeed, it is such a struggle, she finds herself allied with characters I would have expected her to kill on sight. Would she prevail? Would she have to sacrifice those she loves most? And what would happen to her should she succeed? It is one thing to set up such a tense dynamic – it is something else to bring it to a fully satisfying conclusion. I can report that May triumphantly succeeds.
10/10