I thoroughly enjoyed the first book, Outriders – see my review here – so when I saw this sequel pop up on the Netgalley dashboard, I immediately requested it. 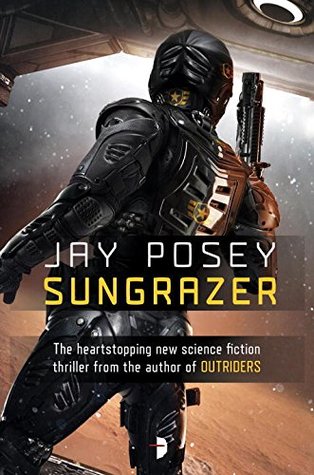 In a new Cold War between Earth and the colonies on Mars, when devastating weapons go missing, there’s only one team you can call – the Outriders. A crack force of highly specialised super-soldiers, their clone bodies are near-immortal. When a fully-autonomous vessel with orbital strike capabilities goes missing, it’s up to the Outriders to track the untrackable. But when the trail leads them to the influential Martian People’s Collective Republic, the operation gets a lot more complicated…

This military science fiction adventure once more hooked me in with yet another enthralling plot in a story where the stakes aren’t just cities or countries sucked into war and devastation, but planets… Things are still very tense between Earth and the Mars’ colonies after the last kerfuffle, where our plucky black-ops team narrowly averted a disaster so when a lethally effective weapon disappears, the Outriders are the obvious choice.

Military science fiction naturally requires a cracking plot – and once more, Posey displays his evident skill in his smooth delivery of a storyline where we have a dual narrative – Lincoln, the captain of the Outriders is one of the protagonists, with the other protagonist being Elliot, who is operating as an undercover agent for United States National Intelligence Directorate. The pacing and ramping up the tension is well handled and I enjoyed the twists and turns, particularly the climactic finale where Elliot encounters the Outriders with mixed results.

The characterisation also needs to be good in this genre as we have to care for those going into battle, because if we don’t, then it robs the story of all its tension. Linc is a likeable chap, with sufficient self-doubt and vulnerability for the reader to connect, but not too much because, after all, he is a super-soldier. We also need to identify with the rest of the squad and as this is the second book, I easily recalled all the characters and their particular quirks and skill sets. While reading this, I couldn’t help thinking that it would make a cracking TV mini-series or film.

But the other major ingredient that military sci fi adventures need is plenty of techie weaponry and nifty battle tactics, which need clear explanation before all the action kicks off or the reader isn’t going to full appreciate what is going on. Posey is accomplished at slipping in the salient facts about the guns and those super-suits this crack black-ops team wear, so that in the heat of battle, we are able to follow all that is happening with no trouble. He manages this without compromising the overall pace or gathering tension of the story. Overall, this is yet again a solidly enjoyable story with some unexpected twists – especially near the end that had me reading far longer than I should have done and this one comes highly recommended.
8/10