As anyone who has visited this site will know, in addition to my passion for science fiction and fantasy, I am also a real fan of historical murder mysteries. When I saw this offering on Netgalley, it was a no-brainer that I would request the arc and was delighted when I had the opportunity to read and review it. 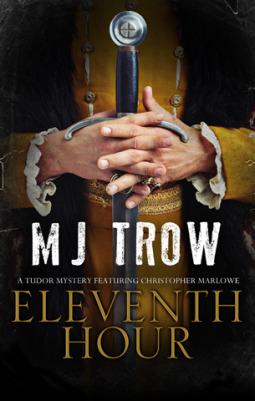 April, 1590. The queen’s spymaster, Sir Francis Walsingham, is dead, leaving a dangerous power vacuum. His former right hand man, Nicholas Faunt, believes he was poisoned and has ordered Kit Marlowe to discover who killed him. To find the answers, Marlowe must consult the leading scientists and thinkers in the country. But as he questions the members of the so-called School of Night, the playwright-turned-spy becomes convinced that at least one of them is hiding a deadly secret. If he is to outwit the most inquiring minds in Europe and unmask the killer within, Marlowe must devise an impossibly ingenious plan.

Of course, what had escaped my notice was that this is the eighth book in this series. However, once again, I managed to land on my feet in that at no time was I floundering or adrift as Trow is far too an experienced and capable writer to let that happen. When Francis Walsingham dies, it falls to Kit Marlowe to try to discover who is the culprit. In this twisting Elizabethan plot there are no shortage of suspects and I really enjoyed reading about Marlowe’s investigations as characters I’ve known from history books leapt to vivid life in this Tudor whodunnit.

Trow clearly had a blast with some of these characters – his depiction of William Shakespeare is particularly amusing and somewhat controversial, given that in this incarnation, poor bumpkin Shakespeare is thoroughly adrift in the London theatrical scene and desperate for work. Though Marlowe is reluctant to employ him as a writer or an actor, given that he is not very good at either. I also enjoyed reading Trow’s version of Sir Walter Raleigh and Sir John Dee. However, the character at the centre of all of these shenanigans is Kit Marlowe himself. Written in third person viewpoint, Marlowe is a complicated, somewhat driven character who provides a series of masks depending on who he is with. I really liked Trow’s characterisation – his detached observation of the people around him and his unwillingness to wear his heart on his sleeve makes him an interesting, complex protagonist.

In order for this book to work, the world building also has to be believable and sharp without slowing down the pace by too much description. Trow has nailed this. We never forget that we are in Tudor England with people whose worries and concerns are so similar to ours – yet also so very different. The climax of this story, along with the denouement worked really well. I certainly didn’t see it coming. Yet there is also another surprise at the end of the book relating to the title which leaves this book on a doozy of a cliffhanger. I shall definitely be looking out for the next book in the series and have already ordered the first one from the local library.

This is highly recommended for anyone who enjoys good quality historical mysteries along the lines of C.J. Samson’s Matthew Shadlake series – see my review of his book Revelation.
8/10