The quirky title and interesting premise caught my eye – I’m always a sucker for crime set in space, so I requested the arc. 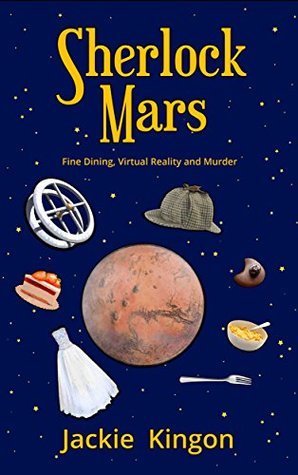 Molly Marbles runs a successful bistro on terraformed Mars. But a virtual restaurant opens near her place, offering the experience of delicacies from across the Solar System with none of the calories. What will this do to her business? Then its owner is murdered in her kitchen. Molly, an amateur detective, springs into action to help the police solve the mystery, while also planning her pop-star daughter’s wedding, keeping her kitchen staff from feuding, and protecting her cyborg friend from the humans-only mob. Meanwhile, the infamous Cereal Serial Killer has escaped prison on Pluto and has everyone worried. Things are getting hectic, but Molly is a resilient and resourceful woman. And her knack for mysteries sees her nick-named ‘Sherlock Mars’.

This is basically a cosy mystery set in space. It has the classic ingredients – a victim that no one seems to care all that much about; a quirky, successful restaurant owner who inexplicably has sufficient time to shoot off here, there and everywhere to run down a number of clues; a friendly law enforcement officer who is happy to let Molly have crucial details of the ongoing case; lots of foodie details along the way.

I like Molly – the fact that she is happily married with adult children and is rushing around organising a wedding for one of them is a major plus point as far as I’m concerned. It’s nice to see women of a certain age confident in her ability and established in a stable relationship and career featuring as the main protagonist for a change. However, while she is crazily busy, I did feel her characterisation was a little thin – mostly because the continual stream of puns and gags around the future version of the past crowded out the opportunities for us to bond with her.

The worldbuilding is detailed and builds up a clear picture of exactly what life is like on Mars for Molly and her family. We get plenty of descriptions of the places they visit and in particular, the build-up to the wedding and the celebration, but again, the focus on the one-liners and wordplay inevitably skews some of the detail, as destinations and placenames are clearly only added for the sake of the gag. The situation regarding androids as political tensions rise around their status is nicely handled and I did enjoy Molly’s relationship with her friend Jersey, whose husband, Trenton, is an android. The only problem I did have, is that given the abilities Trenton displayed in manufacturing a range of goods for Jersey, it did occur to me that the fears of unmodified humans were very well founded – and that aspect simply wasn’t investigated. Perhaps it is being left for another book in the series, as although at no time is this book flagged as the second in a series, there is clearly a previous book somewhere about another case earlier in Molly’s life.

The solution to the case worked well, in that the murderer is someone who has a strong reason for killing the victim and is well placed to keep threatening Molly as she endeavours to track down the perpetrator. The various story arcs are nicely tied up and overall, it comes to a satisfactory conclusion – but I cannot help thinking that if there were a few less puns and wordplay jokes, the overall characterisation and scene setting could have been a lot stronger.
7/10