This meme was started by Books by Proxy, whose fabulous idea was to compare UK and US book covers and decide which is we prefer. This week the theme is the moon, so I’ve chosen A Fall of Moondust by Arthur C. Clarke.

This cover, produced by Gollancz in March 2002, evokes the era of when this classic was written back in 1961. I like the period feel and sense of drama, with the spaceman presumably going for help or rescue and the half-buried ship in the background. Great stuff!

This edition, produced in March 1971 by Signet, takes us right to the heart of the book – nothing generic here. We have the rather mountainous moonscape with the ship evidently trapped in the fine regolith and outcrop featuring in the foreground. Or is it the dust-covered corpse of a long-dead spaceman? I love the balance and dramatic contrast between the bright moon and dark sky. Despite the poor resolution, this is my favourite. 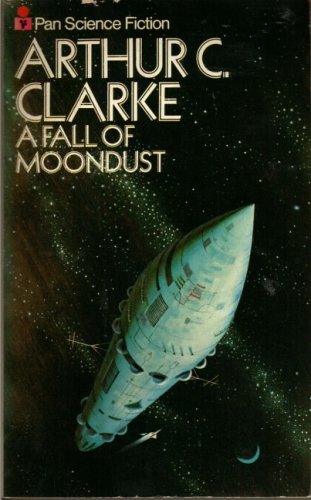 Published by Pan in 1969, this offering is far more generalised with a spaceship cruising through space. That said, the detailed artwork on the ship is beautiful and the spacescape is well done. I don’t like this one as much as the others, though. 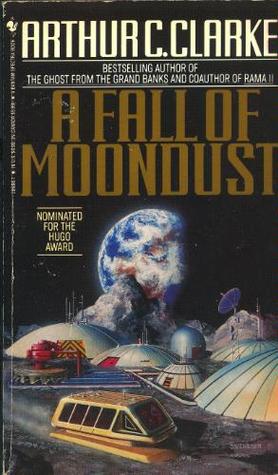 This cover, produced by Spectra Arpil 1991, is also another effective, eye-catching cover. This one depicts the colony on the moon and a ship setting off – it may well be the one about to get into trouble. What particularly sets this one apart is the striking font. Inevitably on most of the covers, Clarke’s name is in the larger, brighter font as an established author with a strong fan following.

This edition was produced by Rosetta Books in November 2012. This is the cover I’ve been most conflicted about. Initially, I rolled my eyes and thought, somewhat huffily, that it was another lacklustre effort for the Kindle market. But… it absolutely nails the plot. A ship stranded in the middle of nowhere, surrounded by an ocean of lethal dust with the dark skies above. I also like the nifty handling of the font and author. The more I look at this one, the more I like it. Which one do you like best?