Himself is a solid fan of this series and I’ve also enjoyed dipping in and out of them – see my review of A Cold Day for Murder. He pre-ordered this offering a while ago, but I forgot all about it until this week, when I found it lurking in my TBR pile. 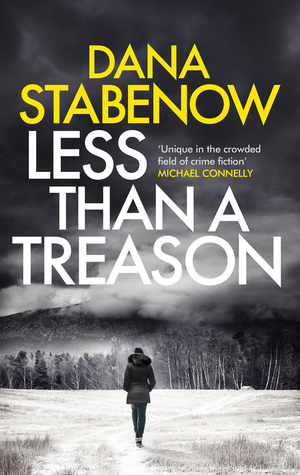 carries a scar that runs from ear to ear across her throat and owns a half-wolf, half-husky dog named Mutt. Resourceful, strong-willed, defiant, Kate is tougher than your average heroine – and she needs to be to survive the worst the Alaskan wilds can throw at her. Two thousand people go missing in Alaska every year. They vanish in the middle of mountain footraces, on fishing boats in the Bering Sea, on small planes in the Bush. Now a geologist known for going walkabout with his rock hammer has disappeared from the Suulutaq Mine in the Park. Was it deliberate? An accident? Foul play? Kate Shugak may be the only person who can find out. But for the fact that Kate, too, is now among the missing…

I loved this one. Stabenow effectively takes us back to the dramatic events at the end of the previous book, Bad Blood, and then resumes the narrative as we witness the fallout after the shocking events that left the book on a major cliffhanger. Once the immediate danger is past, Kate does what she always does when confronted with a major setback – she retreats to the wilderness to lick her wounds and heal. It doesn’t help that her constant companion, Mutt, has gone missing. I very much like Kate’s character – her laconic manner belies the impact she makes whenever she walks into a room. Stabenow is very effective at depicting a protagonist who doesn’t say a lot, yet clearly engenders a strong response – for good or bad – on those around her.

Meanwhile we also follow Jim, Kate’s significant other, who was right in the middle of the drama and pain of the event that found Kate hospitalised, fighting for her life. After she disappears, he keeps waiting for her to get back in touch and in this dual narrative, we also discover what he does while waiting for her.

And in this almost incidental manner, Kate’s next case starts with a missing man as a dead body also turns up near her cabin. Meanwhile, Jim is increasingly concerned about another member of the Shugak family who goes missing – Martin, one of Kate’s cousins. Not that anyone is overly surprised if Martin comes to a sticky end, given some of the company he keeps. Though it is no longer Jim’s job, he starts to ask around for Martin, as well as trying to quietly discover where Kate has got to.

I loved the way that Stabenow dripfeeds all the small details that build up to this murder mystery, while giving us a ringside seat as to how Jim and Kate go about rebuilding their lives after a major trauma. In addition, we also get a real insight into how to live in a part of the world that is intrinsically hostile. Stabenow’s experience of being raised in Alaska plays a major part in the excellent worldbuilding that defines this series. I was particularly struck at how global warming is playing out in this fragile corner of the globe.

If you are looking for a murder mystery series with a difference, then you can jump right into the middle of this one without too much floundering – although you’ll miss a massive backstory. But this is one of my favourite murder mysteries of the year so far and comes very highly recommended.
10/10