Williams is already a go-to author whom I love – her Copper Cat trilogy saw to that – see my review of The Copper Promise. But this time around, I think she’s excelled herself… 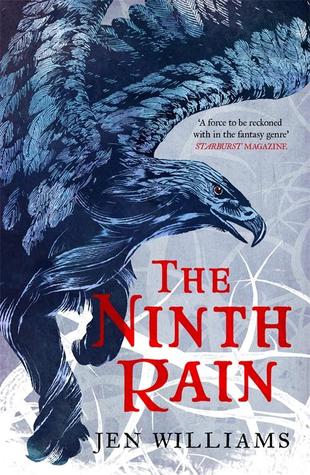 The great city of Ebora once glittered with gold. Now its streets are stalked by wolves. Tormalin the Oathless has no taste for sitting around waiting to die while the realm of his storied ancestors falls to pieces – talk about a guilt trip. Better to be amongst the living, where there are taverns full of women and wine. When eccentric explorer, Lady Vincenza ‘Vintage’ de Grazon, offers him employment, he sees an easy way out. Even when they are joined by a fugitive witch with a tendency to set things on fire, the prospect of facing down monsters and retrieving ancient artefacts is preferable to the abomination he left behind. But not everyone is willing to let the Eboran empire collapse, and the adventurers are quickly drawn into a tangled conspiracy of magic and war.

For starters, this isn’t a straight swords and sorcery. The city of Ebora might be a faded version of its former self, driving Tormalin to seek his fortune elsewhere, but it isn’t the only place enduring sustained and catastrophic deterioration. Sarn and the other surrounding countries are still suffering the ravages of the last invasion by the lethal aliens, the Jure’lia. Wildlife and vegetation have been mutated wherever the huge spaceships have crashed, which also attracts the very dangerous parasite spirits that turns their unfortunate victims inside out if they so much brush against them. Where the huge maggots crashed through, they excrete a thick transparent sludge that hardens to an impervious block of varnish, trapping people inside like flies in an amber. In short, the world is still reeling from an apocalyptic attack several generations earlier.

As you must have gathered, William’s depiction of her ruined world made a deep impression – I’ve even dreamed about it. This could have been a completely bleak tale, but it’s not because the main protagonists, particularly the wonderful Lady de Grazon, ping off the page with a fine disregard for local customs as she insists on investigating every aspect of the alien wreckage, instead of trying to ignore it like most of the population. There is a fair amount of humour scattered through this story, which makes it far easier to read, though that doesn’t mean it’s innately funny – it isn’t.

Tension winds through the story as we are pitchforked right in the middle of this fascinating wrecked world and then try to figure out exactly what is going on as slices of information is steadily fed our way. I also loved the young fell-witch, Noon, kept in a horrible prison called the Winnowry, where others like her who involuntarily summon fell-flame, are incarcerated – apparently so they can atone for their innate wickedness and to protect the rest of society from their fell-fire. Though the fact that their flaming energy is harvested and used to craft a number of exclusive, highly expensive artefacts is also a major factor.

Each one of the three protagonists have their own journey through the book which involves different aspects of this shattered place and unlike a number of epic fantasy tales, I didn’t find myself wanting to know more about one of them such that I skimmed through the others to get back to it. For this rich world sank its hooks into me and since I have finished reading it, I still find myself thinking of it. And I’ll be on the lookout for the sequel as I’m looking forward to revisiting this unusual world.

While I obtained the arc of The Ninth Rain from the publisher via NetGalley, this has in no way influenced my unbiased review.
9/10