This meme was started by Books by Proxy, whose fabulous idea was to compare UK and US book covers and decide which is we prefer. This week the theme is planes, so I’ve chosen Nevil Shute’s thriller No Highway.

This cover, produced by Vintage Classics in September 2009, is cool and retro. However, there’s such a thing as being too restrained and tasteful – could the title be less obtrusive? While it’s attractive, it isn’t eye-catching enough. 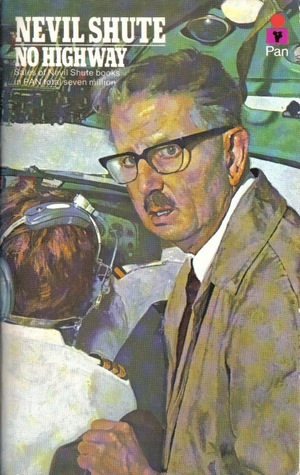 This paperback edition, produced in 1963 by Pan is more effective in depicting the tension that thrums through this novel. The fear on the man’s face is evident, even if this cover is clearly dated and of its time.

Published by Ace, this is another older cover full of drama and darkness. The crashed plane, the dark landscape and the chevron-shaped title and author name is attention-grabbing and links directly to the book’s content. This one is my favourite, despite its evident age.

This cover, produced by Ballantine, is another one full of drama with the plane evidently losing height and a mountain in the background looming menacingly. The prominence of the author’s name indicates that it was produced at the height of his popularity.

This Kindle edition, produced by Lion Books in May 2014 is another innocuous, well behaved effort that shows us a cloudscape from a plane seat. It is another cover that isn’t bothering to reach out to customers – a shame, really as it is a book that deserves to be read, like all his books. Which is your favourite?