I loved Moon’s Vatta’s War and The Serrano Legacy series – see my review here. So when Himself picked this one up as an Easter pressie, I was thrilled. 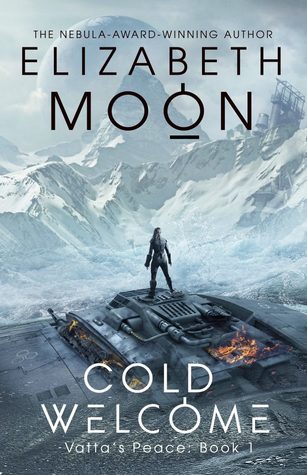 Summoned to the home planet of her family’s business empire, space-fleet commander Kylara Vatta is told to expect a hero’s welcome. But instead she is thrown into danger unlike any other she has faced and finds herself isolated, unable to communicate with the outside world, commanding a motley group of unfamiliar troops, and struggling day by day to survive in a deadly environment with sabotaged gear. Only her undeniable talent for command can give her ragtag band a fighting chance.

This is a full-on survival adventure which I loved. And even if you haven’t already had the pleasure, this is an ideal introduction to Moon’s world. Kylara is a sympathetic protagonist, keenly aware of her responsibility in trying to keep the group alive. And as they are all plunged into one unpleasant experience after another in an inaccessible part of the planet, cut off from everywhere else due to the atrocious weather conditions, there are a steady stream of casualties. Moon’s smooth, unfussy prose and compelling plotting made it impossible to put this one down until it was over.

Accompanying Kylara is a cast of characters – and it soon becomes apparent that they aren’t all going to make it. So I found myself trying to work out who would survive and who wouldn’t, which all adds to the fun. It was also a pleasure to be reacquainted with other members of the Vatta family, particularly Aunt Gracie who is the formidable matriarch who currently heads up the family. It’s always enjoyable to find a book where it’s an older woman with all the power and still rare enough to be noteworthy. She has a fascinating backstory, which is hinted during the book and if you enjoy this one, then I recommend you track down the first book in the Vatta’s War series, Trading in Danger.

Alongside the gritted struggle for survival experienced by Kylara and the group of people caught up alongside her, there is also the question of exactly who is behind the plot. And who is once more targeting the Vatta merchanting family. Moon manages to give us all the necessary information connected with the politicking without losing momentum and pace – which is a lot trickier than she makes it look. It all adds up to a compelling page-turner.

But once the tension has been wound up to a desperate chase, then the climactic finale needs to deliver. And it certainly does – though there is one major dangling plotpoint to encourage Moon fans to look for the next book. I’ll be honest, I was disappointed when I realised there was such a big unanswered question at the end. I would have gone looking for the next one, anyway.
9/10