1925. The fashionable Bright Young Things from London have descended on Wychbourne Court, the Kentish stately home of Lord and Lady Ansley, for an extravagant fancy dress ball followed by a midnight Ghost Hunt – and Chef Nell Drury knows she’s in for a busy weekend. What she doesn’t expect to encounter is sudden, violent death. 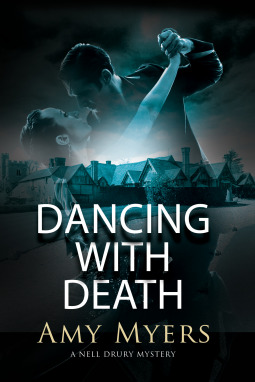 This cosy mystery is a thoroughly enjoyable, engrossing read. Myers evokes the period well as steady, sensible and very ambitious Nell Drury, working at Wychbourne Hall as Chef, suddenly finds herself confronted with a violent murder of one of the guests. While it might have seemed unlikely that a young woman would land a prize post like this, due to the shortage of young men after the ravages of WWI, this was a time when a generation of women had an opportunity for a career – so long as they didn’t want to get married. Nell is one of those women. Fans of Downton Abbey will recognise the strict hierarchy of below stairs as she regularly locks horns with housekeeper, Mrs Fielding, who is thoroughly disapproving of a female chef.

But Nell has other things to worry about other than whether her soufflés will rise, when Lady Ansley appeals to her to ensure none of the servants are caught up in the bloody murder. I like Nell’s character. Her cool-headed steadiness and self-confidence comes from having to fight for her place and growing up in the war years, which still casts a long shadow over most of the characters – and quite right, too. Myers has very much caught the flavour of the age, it seems to me, having grown up with stories of the time from my grandmother, who was a flapper.

In order to make this sort of book really work, we need a good spread of likely suspects amongst the supporting cast and Myers certainly provides plenty of memorable, strong contenders. We have the eccentric aunt who is convinced the house is crowded with a posse of ghosts, all keen to make contact with their living counterparts; the gang of bright young things, including the three Ansley youngsters who are caught up in the frantic round of parties and nightclubbing; two school friends who seem far too attracted to each other rather than their supposed partners; the vamp; the terrifying elderly female relative (think Maggie Smith); and her arch-enemy a sprightly avuncular gentleman. In the middle of this, you have poor, bewildered Lord and Lady Ansley… There is also a strong cast of below stairs characters and a rather forbidding detective from Scotland Yard who travels down to investigate the murders as the local bobbies are completely out of their depth.

This is all as cosily familiar as a late-night cup of cocoa – but there is a good reason why Agatha Christie-type murder mysteries work, demonstrated here by Myers’ well-written homage. The pages simply turned themselves as I dived into this one while struggling with a heavy cold. The denouement was also well handled – I hadn’t guessed whodunit or why and was also pleased that some of the red herrings cast around during the investigation weren’t necessarily as herring-like as I’d thought. It always slightly annoys me when an author provides a parade of suspects and a trail of clues – only to suddenly provide a completely different set of motives with a flourish at the end. Myers isn’t guilty of such a sleight of hand. My only niggle is the very, very abrupt ending – unless for some reason my arc is missing a final paragraph. But this one is recommended for fans of a classic cosy mystery set in a country house.

While I obtained the arc of Dancing with Death from the publisher via NetGalley, this has in no way influenced my unbiased review.