I love Sullivan’s writing – read my review of Lightborn here – and it doesn’t hurt that she is a lovely person. I met her fleetingly at Eastercon a few years ago during a Kaffeeklatsch session (which is when you can sign up for a session where numbers are restricted so you get to have a chance to talk to your favourite author over coffee and biscuits) and she came across as charming, clever and very modest. So I was delighted when I came across this offering. 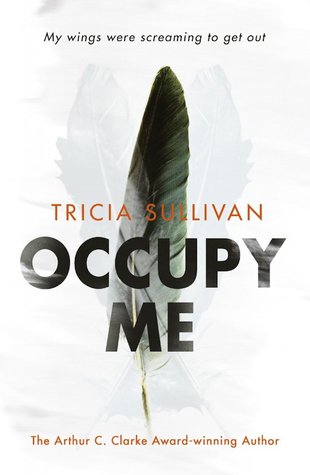 A woman with wings that exist in another dimension. A man trapped in his own body by a killer. A briefcase that is a door to hell. A conspiracy that reaches beyond our world. It starts with the mystery of a woman who barely knows herself and ends with a discovery that transcends space and time. On the way we follow our heroine as she attempts to track down a killer in the body of another man, and the man who has been taken over, his will trapped inside the mind of the being that has taken him over. And at the centre of it all a briefcase that contains countless possible realities.

Yes… I know it sounds mad and a complete mess. But Sullivan’s superpower is that her writing is so solid and strong, she immerses you in her worlds alongside her amazing characters doing amazing things and it seems utterly normal. Pearl is a fantastic character – it’s never easy to write from an alien or ‘other’ viewpoint, because if they are sufficiently different, it is often difficult to sufficiently care for them. But Sullivan manages to make Pearl vulnerable enough that we do bond with her.

Initially I thought she was some sort of fallen angel – but that is far too predictable for Sullivan’s fervid imagination. She writes the unusual brilliantly with wonderful descriptions that are punchy and to the point. Just as importantly, there is a strong structure and causality underpinning her original take on what powers the universe. Wild it may be, but there is nothing loose or wafty about the theory behind her worldbuilding.

As for the main players in this story – while Pearl, the main protagonist, was my favourite by a long country mile, the cast of supporting characters also leap off the page. There is Dr Sorle, conflicted and suffering, who is literally pulled in two directions; the corrupt dying plutocrat; and Alison, a stroppy vet. And in the midst of all this amazing story are regular shafts of humour – not jokes or comedy set pieces, but the kind of manic funniness that often occurs when we are pushed to our extreme.

This story grabbed me from the first page and wouldn’t get go – I was beguiled, challenged, amused and thoroughly entertained. Another outstanding read of 2017.
10/10