After attacking Devil’s Reef in 1928, the U.S. Government rounded up the people of Innsmouth and took them to the desert, far from their ocean, their Deep One ancestors, and their sleeping god Cthulhu. Only Aphra and Caleb Marsh survived the camps, and they emerged without a past or a future. The government that stole Aphra’s life now needs her help. FBI agent Ron Spector believes that Communist spies have stolen dangerous magical secrets from Miskatonic University, secrets that could turn the Cold War hot in an instant, and hasten the end of the human race. Aphra must return to the ruins of her home, gather scraps of her stolen history, and assemble a new family to face the darkness of human nature. 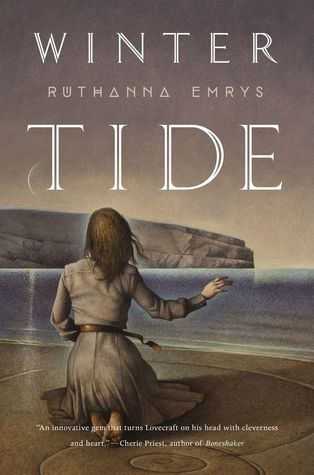 For those of you who don’t recognise the references, Winter Tide is set in the world of H.P. Lovecraft, the famous horror and dark fantasy short story writer and novelist. Though he died unknown and poverty-stricken, Lovecraft is popularly regarded as the father of dark fantasy due to his vivid and disturbing world where creatures from another dimension inimical to humans are on the verge of breaking through to our world. Emrys manages to give us an insight in the life of one of the two survivors of the Government attack on Innsmouth in 1928, which is reported and written about in Lovecraft’s writing.

I fell in love with this spare, gripping tale within a couple of pages – the character and premise immediately pulled me into the story where a paranoid and jittery US Government are seeing threats from anyone who looks different, back in 1949. Of course, part of the power of this story is that that febrile fearstoked political atmosphere so well depicted in this thriller also uncomfortably reflects the same mindset pervading mainstream thinking now in the 21st century.

Aphra is a marvellous character and the first person viewpoint (I) gives the reader a ringside seat into her sense of isolation, her anger at the loss of all her family with the exception of her brother and her constant, prickling feeling of danger whenever in a new situation, given her odd appearance. This could have so easily descended into a bleak trudge – but her spiky determination not to be overwhelmed by her grim circumstances gives us a clue as to why she survived while so many others died.

The story, without any apparent headlong rush, nonetheless steadily unspools, gathering momentum as this odd, compulsive world continues to beguile. The parent race, the Yith, are also represented and there are some welcome shafts of humour in amongst the turmoil and danger. I read way longer than I should have done to find out what happens next and climactic scene on the beach when Aphra meets her grandfather fully displays Emrys’s impressive talent. When I finally finished, I was dazed and excited in equal measure. And I cannot stop thinking about this one… In short, another outstanding read that has me humming with pleasure and excitement. Ruthanna Emrys. Remember the name – she is a talent to be reckoned with and this is a series that shouldn’t be missed by science fiction and fantasy fans.

While I obtained the arc of Winter Tide from the publisher via NetGalley, this has in no way influenced my unbiased review.
10/10