I’ve absolutely loved the Rebel of the Sands series – see my review of The Rebel of the Sands and after the thrilling ending to Traitor to the Throne, I became a bit desperate for some more desert fantasy to whisk me away from cold, dreary old February, so turned to this likely looking candidate for more sand and heat… 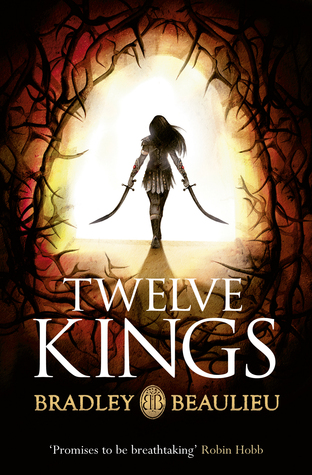 Sharakhai, the great city of the desert, center of commerce and culture, has been ruled from time immemorial by twelve kings—cruel, ruthless, powerful, and immortal. With their army of Silver Spears, their elite company of Blade Maidens, and their holy defenders, the terrifying asirim, the Kings uphold their positions as undisputed, invincible lords of the desert. There is no hope of freedom for any under their rule. Or so it seems, until Çeda, a brave young woman from the west end slums, defies the Kings’ laws by going outside on the holy night of Beht Zha’ir. What she learns that night sets her on a path that winds through both the terrible truths of the Kings’ mysterious history and the hidden riddles of her own heritage. Together, these secrets could finally break the iron grip of the Kings’ power…if the nigh-omnipotent Kings don’t find her first.

Bradley is clearly an experienced and capable writer. He introduces his main protagonist – an orphan with a terrible backstory – and little by little, we understand exactly who she is and why she is so driven. Çeda is a really interesting character – initially, she seems yet another sword-waving heroine, who manages to somehow overcome normal female behaviour to give us an unlikely-yet-equally-badass-protag that is rapidly becoming the norm in fantasy novels. I do get a tad exasperated at times by the ease with which these girls get access to expensive weaponry and the training to go with it – but, hey, this is fantasy, right?

However, Bradley then devotes a large chunk of this long novel – nearly 600 pages long, though it doesn’t feel like it – to showing us exactly how she has got to where she is. And a hard old road it’s been… Alongside Çeda’s amazing journey, we also follow the fortunes of the young street kid who befriended her and was her partner in mischief for most of their childhood. Emre doesn’t have Çeda’s reckless streak and often feels inadequate that his instinct is to back off just when she surges forward to get stuck in. Though as far as I can see, his is the more intelligent move… He is also on a journey throughout the book, which is mostly dual narrative, charting the different paths these young people take in a brutal society forged by the demands of the desert.

Bradley’s world is intricate, vivid and engrossing. I love the layers of society and power he has built against this unforgiving backdrop – and the magical elements are woven in with skill to provide plenty of impact when we finally get to learn what exactly is going on during the holy night of Beht Zha’ir. While there are frequent flashbacks, I didn’t find them jarring, as they helped us to understand the motivation of our two main protagonists, who I became very fond of throughout the book and am looking forward to getting reacquainted with in With Blood upon the Sand. If you enjoy quality epic fantasy set in the heat and drama of a desert backdrop, then this one comes highly recommended.
9/10