I encountered the first book, The Falconer, at the beginning of the year and loved the intense, brutal writing style of this YA genre mash-up, so was delighted when this offering became available at the local library. 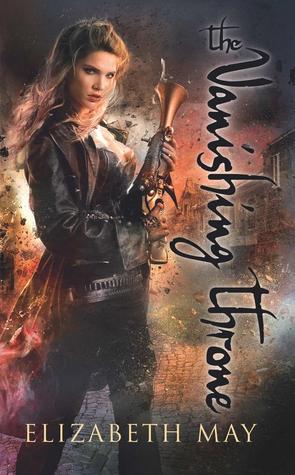 Aileana took a stand against the Wild Hunt, and she lost everything: her home, her family and her friends. Held captive by her enemy, and tormenting herself over her failure, escape seems like only the faintest possibility.

Whatever you do – don’t start with this book. Go back to The Falconer, which ended on a devastating cliffhanger and pretty much picks up exactly where the first book left off. So if you start with this one, while you may not be floundering too much, you will definitely be missing an important chunk of the story. Having your main character being subjected to sustained torture can be tricky business, especially in a YA read, and needs careful handling. Fortunately May deals with it well and Aileana certainly is left with wounds that run deeper than the scars inflicted as the storyline progresses.

I was concerned that as the first book galloped towards an apocalyptic climax, the second book would necessarily be something of a let-down – and it proved to be nothing of the sort. May doesn’t ease up on the pace one iota and Aileana is immersed into another series of twists and turns that reveals yet more of the fae and their tortuous relationship with humanity reaching back millennia.

It was also a treat to meet up again with the strong supporting cast of characters who people The Falconer… I was very relieved that Derrick, the stroppy pixie, survives. Apart from anything else, the repartee between Aileana and Derrick provides some very welcome humour. Not that this is particularly downbeat – there is too much going on and too many issues for our protagonist to consider for the mood to become too gloomy. However, it is gritty – wounds cause scars. People sustain losses. And bear grudges…

Once more, I was swept up into this enticing, edgy world. Though as I approached the ending I became increasingly concerned that it could not compete with The Falconer’s shocking conclusion. But I need not have feared – as I got to the final page, I was scraping my jaw off the floor, while being very relieved that I shan’t have to wait too long for the final book, The Fallen Kingdom, in this exciting, entertaining series. Highly recommended.
9/10