This meme was started by Books by Proxy, whose fabulous idea was to compare UK and US book covers and decide which is we prefer. This week the theme is diamons, so I’ve chosen Diamond Mask – Book 2 of the Galactic Milieu Trilogy by Julian May.

This is the offering produced by Pan Books in 1994 is for me, the best. I love this cover – beautiful and otherworldly. It doesn’t hurt that this is the cover of the book we own which absolutely blew me away when I read it and I still don’t think I’ve read anything else quite like it. 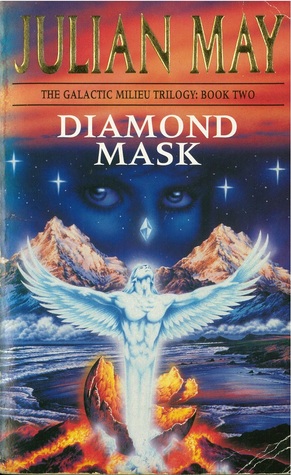 This cover produced by Del Rey Books in January 1995 could be every bit as strong as the above offering – the artwork is detailed and beautiful with that stunning diamond in the centre of the cover. And then they go and ruin it by sticking that horrible block of red across the top and a lot of blather over some of the remaining landscape *sigh*…

This more modern cover, produced by Tor in 2013 is reasonably effective. I’m always a sucker for a cool-looking spacescape. I find it fascinating that they figure – correctly, I suspect – that May’s name is the one which will influence the buying public, rather than the book title. The only thing that jars for me is the mask that looks as if it’s a complete afterthought.

This Italian cover, produced in 1996 by Nord, might be another strong piece of artwork – but your guess is as good as mine, given they smothered a chunk of it with a vile bilge-brown frame, then plastered that peculiar metallic wing affair across the top of the main detail with a rather shocked-looking face peering out. Probably the original artwork designer horrified at the horlicks they’ve made of his cover.

This effort, produced by Knopf in March 1994, is plain bizarre. Nothing on the cover to denote this is science fiction, at all. The monochrome image of a rather androgynous young man is ruined by slapping a bright yellow slatted band across his eyes – apparently to denote the diamond mask of the title. Could it be more jarringly ugly? Oh yes – they then excel themselves by sealing his lips with a bright red box that informs the reading public that this is A Novel. I hope no one got paid for producing this crime-against-design, because if they did it’s daylight robbery.

I think that given the quality of the writing and the importance of this amazing series to the genre, some of these covers are a disgrace. Perhaps you feel I’ve been a tad harsh – what do you think?