I fell in love with reckless, danger-loving Amani in Rebel of the Sands when I seemed to be the last person on the planet to have read this highly praised book, so would I enjoy the sequel? 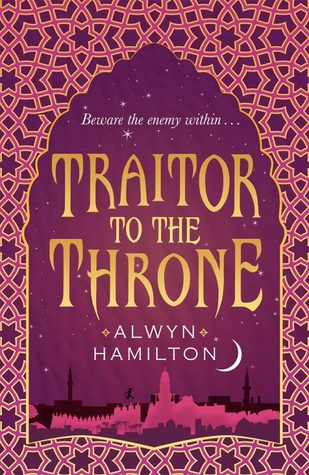 Mere months ago, gunslinger Amani al’Hiza fled her dead-end hometown on the back of a mythical horse with the mysterious foreigner Jin, seeking only her own freedom. Now she’s fighting to liberate the entire desert nation of Miraji from a bloodthirsty sultan who slew his own father to capture the throne. Forget everything you thought you knew about Miraji, about the rebellion, about djinni and Jin and the Blue-Eyed Bandit. In Traitor to the Throne, the only certainty is that everything will change.

Firstly, a huge thank you to NetGalley. I requested this one more in hope than expectation and was thrilled when I was granted permission to read it – only to discover that I wasn’t able to download it. The techs at NetGalley were on it, unfailingly helpful and persistent until they sorted out the problem and Traitor to the Throne duly turned up on my trusty Kindle.

And I was even more grateful once I tucked into this gem, for as much as I relished the first book, I loved this one even more. Hamilton has a very nifty trick for those who haven’t had the pleasure of reading the first book – she gets Amani to recite a tale about her exploits to date at the start of the story. While I would highly recommend those of you who may not have read Rebel of the Sands to do so, if you pick up Traitor to the Throne first, I can guarantee you won’t be adrift. And the abbreviated blurb is spot on – everything does change in this next slice of the adventure.

For starters, the rebels are having a tough time of it. Life is hard and dangerous as they are unceasingly harried and their comrades continually foray forth on life or death assignments and all too often don’t return. Until it is Amani’s turn to volunteer – and she finds herself in more trouble than she knows what to do with and one of the biggest mistakes she made in escaping her town now rebounds on her.

Amani is put in a position where she is forced to consider the consequences of her actions and question if what the rebels are doing is right for the inhabitants of Miraji. I really loved this aspect of the story. Firstly, considering her situation, I thought it psychologically was spot on and I also liked the extra spin it put on the worldbuilding, when we get a ringside seat as to the motivations of the antagonist. It raised the stakes, winding this adrenaline-fuelled adventure up another notch.

I thought I could see how this was going to end – until Hamilton suddenly threw a massive spanner in the works and pulled yet another game-changing plot twist right at the end. Marvellous stuff. While ending that particular storyline satisfactorily, once more everything has been thrown up in the air – and I will be fretting for another slice of this wonderful world for the rest of the year.

While I obtained the arc of Traitor to the Throne from the publisher via NetGalley, this has in no way influenced my unbiased review.
10/10