I really enjoyed reading the first YA, epic fantasy series, Truthwitch, last year and was delighted when Himself ordered the sequel from the library.

After an explosion destroys his ship, the world believes Prince Merik, Windwitch, is dead. Scarred yet alive, Merik is determined to prove his sister’s treachery. Upon reaching the royal capital, crowded with refugees, he haunts the streets, fighting for the weak—which leads to whispers of a disfigured demigod, the Fury, who brings justice to the oppressed.

When the Bloodwitch Aeduan discovers a bounty on Iseult, he makes sure to be the first to find her—yet in a surprise twist, Iseult offers him a deal. She will return money stolen from him, if he locates Safi. Now they must work together to cross the Witchlands, while constantly wondering, who will betray whom first?

After a surprise attack and shipwreck, Safi and the Empress of M 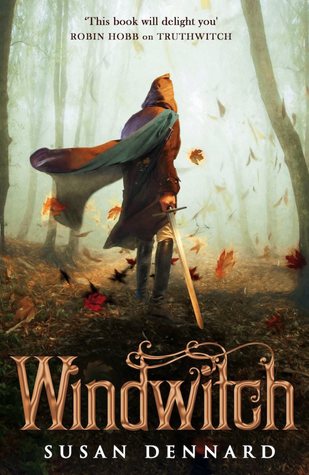 arstok barely escape with their lives. Alone in a land of pirates, every moment balances on a knife’s edge—especially when the pirates’ next move could unleash war upon the Witchlands.

I would recommend that if you haven’t had the pleasure, go and track down Truthwitch and read it first. The above blurb gives the starting point of the main characters at the beginning of Windwitch, but as you can see each one is right in the middle of a major situation so you really are missing out on a chunk of the ongoing storyline if you try to start with this one.

As the title suggests, this book concentrates mostly on Prince Merik’s efforts to track down his murderous sister and gather evidence to prove her involvement in his attempted assassination. However the two witches, Safi and Iseult still feature as they are caught up in their own adventures and Dennard manages to keep their storylines plunging forward. I particularly liked the fact that each of them badly misses the other and part of each of their character progression is that Iseult tries to emulate Safi’s headlong impulsiveness when she needs to react swiftly. While Safi continually envisages what Iseult would say or do in a particular situation.

But for me, the character who really leaps off the page is Vivia, Merik’s sister who is in effect ruling as her father continues to decline from a mysterious wasting illness no one can cure. Haunted by her mother’s madness and subsequent suicide, Vivia struggles to cope with the ongoing crisis of food shortages and incipient warfare. We get a ringside seat at her continued resentment against her dead brother, who’d had such a easy life in comparison, which contrasts nicely with Merik’s gritted fury at her perfidy. This lethal sibling rivalry is in strong contrast to Safi and Iseult’s continuing bond, for despite being equally magically talented they manage to complement each other, where Merik and Vivia became increasingly distrustful of each other’s growing powers.

All in all, this entertaining, foot-to-the-floor adventure scooped me up and held me, even though this isn’t my favourite genre. While Dennard nicely wraps up this particular storyline in a series of twists – some I saw coming and some I didn’t – there are a host of ongoing plotlines that need a satisfactory outcome and I’ll be waiting not-so-patiently for the next slice of Witchlands goodness.
8/10