I’ll be honest – this is a complete mistake. I was under the impression that I had got hold of this latest series from Stross, so was somewhat underwhelmed when I realised it was, instead, the opening chapters as a taster… 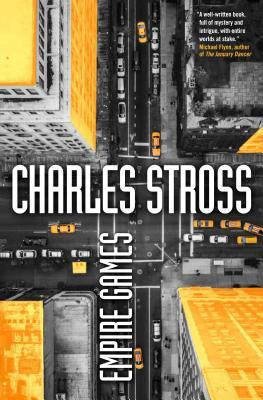 The year is 2020. It’s seventeen years since the Revolution overthrew the last king of the New British Empire, and the newly-reconstituted North American Commonwealth is developing rapidly, on course to defeat the French and bring democracy to a troubled world. Two nuclear superpowers are set on a collision course. Two increasingly desperate paratime espionage agencies are fumbling around in the dark, trying to find a solution to the first contact problem that doesn’t result in a nuclear holocaust. And two women—a mother and her long-lost, adopted daughter—are about to find themselves on opposite sides of the confrontation.

I have left a large chunk out of the very chatty blurb because if you haven’t read the Merchant Princes series then the names aren’t going to mean all that much, anyway and I think it’s far too much information that you’ll learn more effectively once you read the book. That said, this is a spin-off series from the Merchant Princes series, which is a portal worlds thriller. I’ve only read a couple of books in this series, but found them thoroughly enjoyable and engrossing which was why I requested Empire Games. This epic storyline is spread across multiple worlds, so it takes some concentration to work out what is happening to whom and sadly, the preview extract I received was a misery to read. It’s been a while since I’ve had to slog through anything so appallingly formatted, with a binary thingy of zeroes and ones randomly appearing throughout the text and words being split across lines numerous times – I don’t think there was a single page where the text was correctly formatted.

If it hadn’t been a NetGalley preview, it would have gone winging across the room. I had a pre-migraine headache blow up on me later during the day I’d been battling through this ‘mare of a read and I’m not sure the two aren’t connected. I’ve made a promise to myself that it’s the last time I trudge through anything so egregiously messed up, anyway.

There was a lot of information to impart and just as the story was starting to gather pace and I was beginning to care – it all came to an end. Obviously I cannot comment on the characterisation, the pacing, the plotting or how satisfactorily the story ends. But it’s out there and given that Stross is an able storyteller, it should be good.