We are back at St Mary’s, a top secret, government establishment where historians travel back in time to investigate what really happened. It’s an exciting and dangerous occupation that requires a certain attitude, which our protagonist Max has in spades… 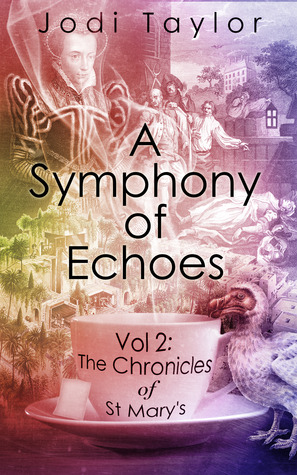 The sequel to the hit book Just One Damned Thing After Another. Follow the adventures of those tea-sodden historians at St Mary’s as once again they dance on the edge of disaster.

And there you have it – the blurb certainly doesn’t venture anywhere near spoiler territory, does it? Once again, Taylor’s punchy prose scoops the reader up into Max’s world and catapults us into the middle of St Mary’s, where Max feels she belongs for the first time in her life. If she didn’t have such a desert-dry sense of humour, this could be a very grim read as plenty goes wrong. I keep thinking, as I read all the sudden reverses and nasty surprises that constantly assail our adventurers, that this series would transfer very well to TV. In the meantime, it’s a joy to read it as the rain lashes down outside and I feel comfortably happy I’m not in the middle of these disasters.

A routine journey to check out the Hanging Gardens of Babylon goes wrong to the extent that I realised why so many of the time-travelling historians die and then an antagonist from the first book pops up, causing yet more mayhem. Having said that – Taylor has written this one, so that if you did pick it up unaware it was part of a series, you wouldn’t flounder for long.

For all her snarky asides – which I love – Max has had a dire childhood which has left her with scars and vulnerabilities and it is this mix of gutsy derring-do and sudden, painfilled fury that makes her such an engrossing protagonist. She regularly gets things spectacularly wrong and never fails to come out swinging when her back is against the wall, being brave to the point of foolhardiness.

Taylor keeps the pace up, often skipping the preparation or lead-up to an expedition so one moment it is being proposed – and the next we are right in the middle of Babylon or at the court of Mary, Queen of Scots. I found myself at the end of the book with something of a jolt, wanting yet more and convinced the slight lull in between the action was merely a precursor to yet another hair-raising adventure. And it won’t be long before I return to this series, for it has wormed its way into my head so I often find myself thinking of Max, Leon and Peter and wondering what will next go wrong for them. If you enjoy time travelling tales with plenty of action, then don’t start here – go looking for Just One Damned Thing After Another, which is a quote about the way some historians view history, apparently. It certainly seems to be the case at St Mary’s.
10/10