This meme was started by Books by Proxy, whose fabulous idea was to compare UK and US book covers and decide which is we prefer. This week’s theme is drink, so I have chosen Dandelion Wine – Book 1 of the Green Town series by Ray Bradbury.

This is the cover produced by Bantam in 1968. While I love the disturbing artwork, which accurately portrays aspects of Bradbury’s wonderful, shocking writing, the clunky chunk of black across the top really intrudes on the cover design, I feel.

This cover was produced by Earthlight in July 2000. The artwork is lovely – I particularly like the portrait of the young boy set against the apple blossom and the dandelion clock. The mood achieved is poignant and thoughtful – though I can do without the band of raspberry pink across the top of the cover for the title and author. 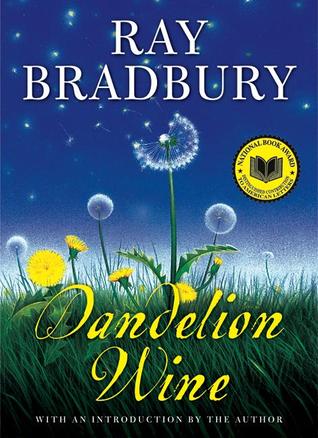 This offering, produced by William Morrow Paperbacks in April 2013 is more like it. The night sky dotted with stars with the half-blown dandelion clock in the foreground is beautiful and evocative. I’d rather there wasn’t the ugly yellow blob announcing the National Book Award – but it might encourage folks to buy it and at least the yellow chimes with the dandelion flowers. 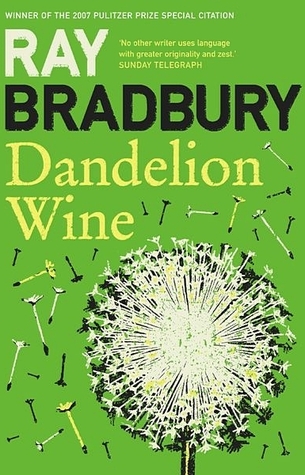 I think this Harper Voyager edition produced in 2013 is ghastly. What a revolting shade of green and the dandelion seeds more resemble nails. Gone is the poignant delicacy of all of the previous covers in favour of a somewhat desperate bid for catching the eye, which it does – in the worst possible way. 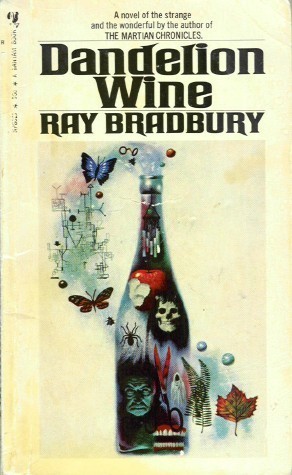 This 1973 edition produced by Bantam reprises the bottle of wine – but this time around they have lost that heavy border and thick band for the title and author. This gives us an opportunity to focus on the intricacy of the wonderful artwork, which makes this my favourite cover.

What about you – which cover do you prefer?