Yes, I managed to do it again – begin with the second book in the series… So has it impacted on my understanding and enjoyment of this fast-action, foot-to-the-floor adventure? 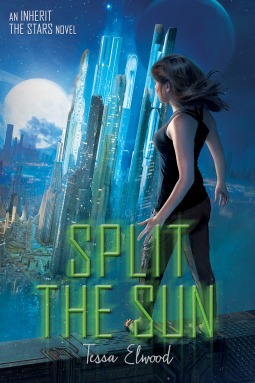 The Ruling Lord of the House of Galton is dead, and the nation is in shock—or celebrating, depending on the district. Kit Franks would be more than happy to join him.
Kit’s mother bombed the digital core of the House, killing several and upending the nation’s information structure. No one wants the daughter of a terrorist. Kit’s having dreams she can’t explain, remembering conversations that no longer seem innocent, understanding too much coded subtext in Mom’s universal feed messages. Everyone, from Mom to the rebels chasing her, has a vision of Kit’s fate—locked, sealed, and ready to roll. The question is, does Kit have a vision for herself?

As it happens, this time around I’ve got away with it as Elwood has shifted the action and focus on a completely different protagonist to those featuring in her first book Inherit the Stars. This book is all about Kit, who has had a hard time of it – the only person in her life who saw fit to spend time and energy on her upbringing has recently died. And on top of that, her mother has just been revealed as the perpetrator of a catastrophic attack on the city, killing dozens and inflicting ongoing damage on the systems used to run and control the administration necessary to run everything.

Kit finds herself the centre of attention – and not in a good way. The book starts with her attempting to fling herself off a building. Needless to say, that doesn’t happen. But the story then takes us on a roller-coaster ride as Kit is harried by events and folks who want information out of her – and in amongst all the fighting and fleeing, she has to discover who she is and what she wants.

Elwood’s writing is intense and Kit’s spiky persona pings off the page. I had originally intended to pick this one up, read a few pages and then settle down to sleep. Except I didn’t – the Kindle just wouldn’t leave my hands as I continued pressing the pages to discover what would happen next. Elwood’s ability to interweave Kit’s dysfunctional past amongst all the mayhem falling on her head is impressive and had me fiercely rooting for her. While romance isn’t normally my thing, Elwood handles the unfolding relationship between Kit and Niles really effectively so this doesn’t suddenly transition into a soft-focused lurve story after being a fairly gritty adventure – a transformation I personally hate. Kit’s growing attraction to Niles isn’t the centre of her existence, and something she tries to put into context, not surprising given everything else that’s going on around her. I was initially a bit concerned about Niles, but grew to like him more and more as the book progressed, which is a testament to Elwood’s writing skill. I’m generally immune to buff and endearing love interests…

My one grizzle – and it is normally a dealbreaker – is that the conclusion is slightly fumbled. The non-stop action needed to slow down just a tad more at the end in order to allow the reader to fully catch up with the events that wrapped up the storyline. However, I’ll even forgive Elwood this – she has written a cracking adventure tale set in the far future with an engaging enjoyable protagonist and took me with her on the action-packed journey. Great stuff!

Receiving a copy of Split the Sun from the publisher via NetGalley has in no way affected my honest opinion of this book.
8/10