I came across this book on someone’s book blog (really sorry I cannot recall exactly who) and immediately checked out to see if it was available on NetGalley as I loved the premise. It was – so I requested and acquired it. Yippee! 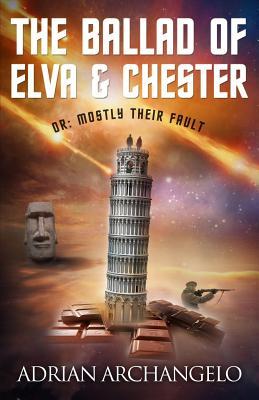 Elva & Chester are space aliens who appear to be human and have been here on earth since the year 1100, with the goal of helping humanity develop more empathy and compassion. (The rest of the beings in the galaxy don’t want us flying around out there until we do.) The pair have no human habits to contend with, but they are extraordinarily responsive to chocolate and hold it in special regard. Although they mean well for us, they find human behavior baffling, and continually see their plans twisted by human responses. Consequently, nearly everything wrong on this planet over the past thousand years was caused by one of their debacles.

And that’s most of the blurb. I was a tad taken aback when I was initially confronted with a major info-dump right at the beginning of the novel all in ‘tell’ mode and nearly consigned it to the DNF pile. However, I persevered and was glad I did, as when the story finally got going, it was quirky and enjoyable. Elva and Chester are tasked with making humanity fit to mingle with the wider alien community, who want nothing to do with them until they are more compassionate, enlightened and peaceful. This is book catalogues their long-running attempts to convert human beings into becoming more benign through the critical lens of a visiting group who have come to judge their efforts.

However, I became increasingly aware that while this is a pleasant read and mildly enjoyable, I would have been a whole lot more engaged and amused if I hadn’t known the punchline right at the beginning of the book. If it had been flagged as an alien visitation attempting to influence humans by mind control – and as the plot progressed we’d begin to see through Elva and Chester’s farcical attempts that this is, in fact, a comedy of errors rather than some dastardly alien plot, it would have been more effective.

The ending was something of a surprise, which I enjoyed but I was conscious from about a third of the way through that I knew far too much about this book’s ultimate punchline. It is also a real pity that dreadful info-dump at the beginning of the book wasn’t edited out. All the information in there was mostly revealed throughout the book – I would have liked the judges to have had separate personalities and characters, for instance. It would certainly have given the ending more of an impact.

If you are looking for an amusing, lightweight read, then by all means have a go. But the pity of it is, with sharper editing and a less revealing blurb, this book could really have packed a punch.
7/10