This meme was started by Books by Proxy, whose fabulous idea was to compare UK and US book covers and decide which is we prefer. This week’s theme is train tracks, so I have chosen Raising Steam by Terry Pratchett. Thank goodness this crop of covers are better than the shower produced for Equal Rites.

This is the hardback cover of the book produced by Doubleday in November 2013. It’s the cover of the book I possess. I love the colours and the sense of madcap mayhem that tends to abound in all the Discworld novels and is effectively depicted in this cover. This is my favourite.

This hardback version published by Doubleday in March 2014 is also enjoyable, though I don’t think it packs the punch of the previous one. But you definitely get a sense of the comedy and that it is set within a particular time, albeit with a strong Fantasy slant…

This offering, published by Corgi in October 2014, is back to the sense of mayhem and joyous feeling of PROGRESS that comes out clearly in the book. I really like this one.

This German cover, published in November 2014 by Manhatten, is far more sedate and there is little indication that the story is humorous or full of the satirical joie de vivre that was Pratchett’s speciality in the Discworld universe. 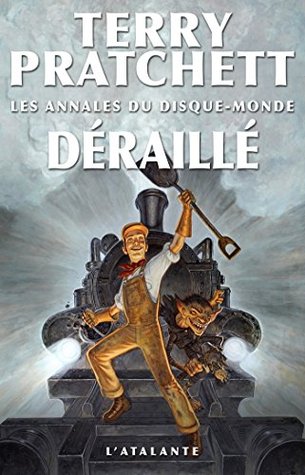 I was amazed at how much an identical cover design can be changed by different colour tones last week and this French cover is another example. Published in November 2014 by L’Atalante, this cover gives quite a different feel to the brighter Corgi version.

Which is your favourite, or the one you dislike the most?